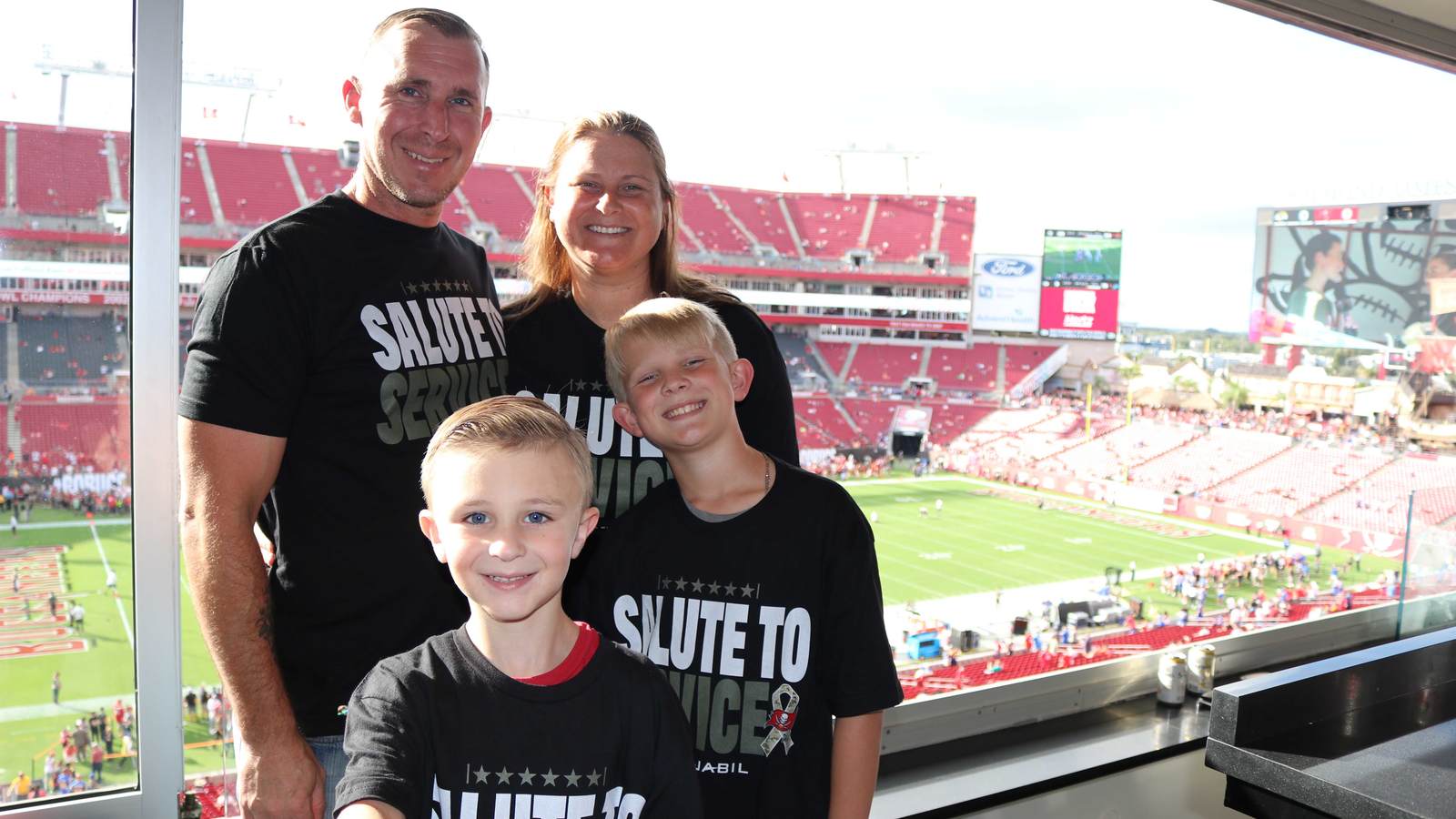 Often when you see a military member in uniform, you’ll see people stop to thank them for their service, for their sacrifice, in keeping our country safe. What you don’t always see, is people stopping to thank the families of these brave men and women.

That’s why the Tampa Bay Buccaneers, in conjunction with the Schwarzkopf family and USO Central Florida work together to recognize these local military families through the General H. Norman Schwarzkopf Military Families of the Year Award. The award, which is named after the late General Schwarzkopf and his family, recently honored and celebrated local military families living in the Tampa, Fla., area during the Buccaneer’s recent Salute to Service game, Sunday Nov. 6.

“The USO is extremely grateful for our partnership with the NFL, Tampa Bay Buccaneers and Schwarzkopf family for celebrating our local military community here in the Tampa area during Sunday’s Salute to Service Game,” said Dana Cervantes, Executive Director of USO Florida. “The USO, NFL and Tampa Bay Buccaneers brings service members and their families together through their shared love of football and provides opportunities for those serving to connect with one another around this tradition of sport and entertainment.”

Salute to Service is the NFL’s year-round commitment to Honor, Empower, and Connect with our nation’s service members, veterans, and their families.

Through the NFL’s Salute to Service campaign, together the NFL, USO and local football teams like the Tampa Bay Buccaneers and other partners shows its gratitude for the service and sacrifice of our military through partnerships, grants, and recognition of service members, veterans, and their families.

More specifically, every year a family from each branch of the military: Army, Marines, Navy, Air Force, Coast Guard and National Guard/Reserves is chosen as a family who has best demonstrated the values of integrity, courage, commitment and service before self, while sharing in the sacrifices of service to our country.

One of those families awarded this year was the family of Sgt. 1st Class Aaron King, a U.S. Army Combat Medic, currently assigned to the Tampa Recruiting Battalion, as an Army recruiter. 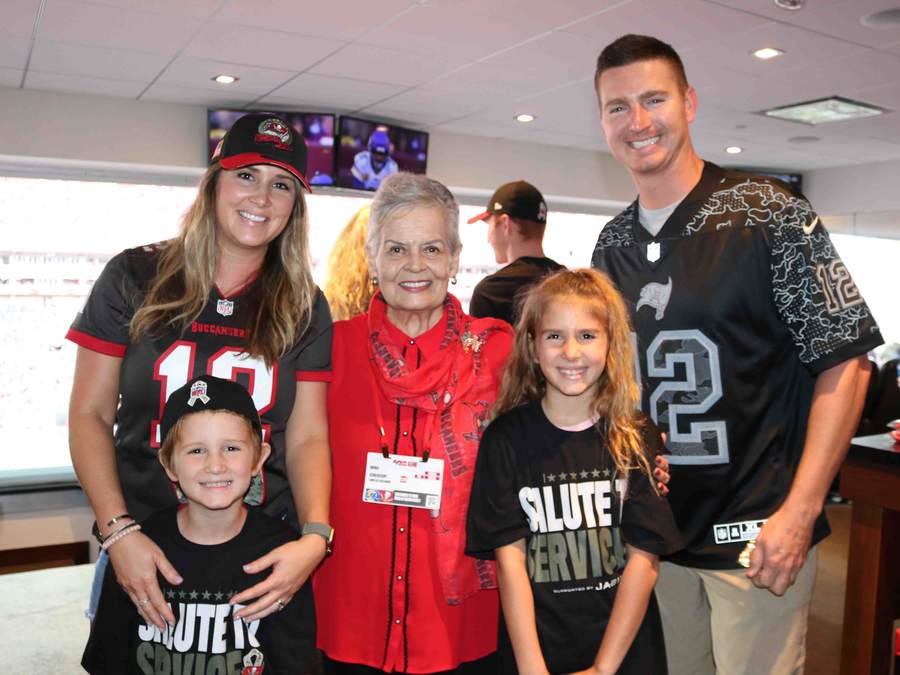 King joined the Army in early 2008 as a Combat Medic, and his dream has always been to help others, and wanted to provide care to military service members and ensure they always had someone to care for them. King’s wife Lauren has been committed to serving her community and other service members and veterans throughout her service as a military spouse as well.

“We are honored to be here today, and to have been selected as one of the Schwarzkopf families of the year and to be recognized by the USO, Tampa Bay Buccaneers, the NFL and Schwarzkopf family,” said King. “As huge Bucs fans, this day has meant a great deal to my family and me, especially after the challenges we faced the past few years.”

King and his family have been a family of service for over 14 years. Throughout multiple overseas assignments and deployments, the King family has selflessly served their country and volunteer at the local Veteran’s hospital and within the community. Like many military families, the King family has faced multiple challenges and hardships, where the easiest route would be to give up and not continue serving, but in the face of adversity they continue to push forward supporting their communities and each other.

“Our military families sacrifice so much during their time in the military. From missed birthdays, holidays and being separated for long periods of time during deployments – on top of other life challenges that may come their way - it really takes its toll on our military families,” said Annamae Kacsandi, Center Operations and Program Manager for USO Central Florida. “Providing our military families an opportunity to attend a Bucs home game, and to watch their excitement as they root for the home team and be recognized on the Bucs’ pirate ship during the game was truly heartwarming.” 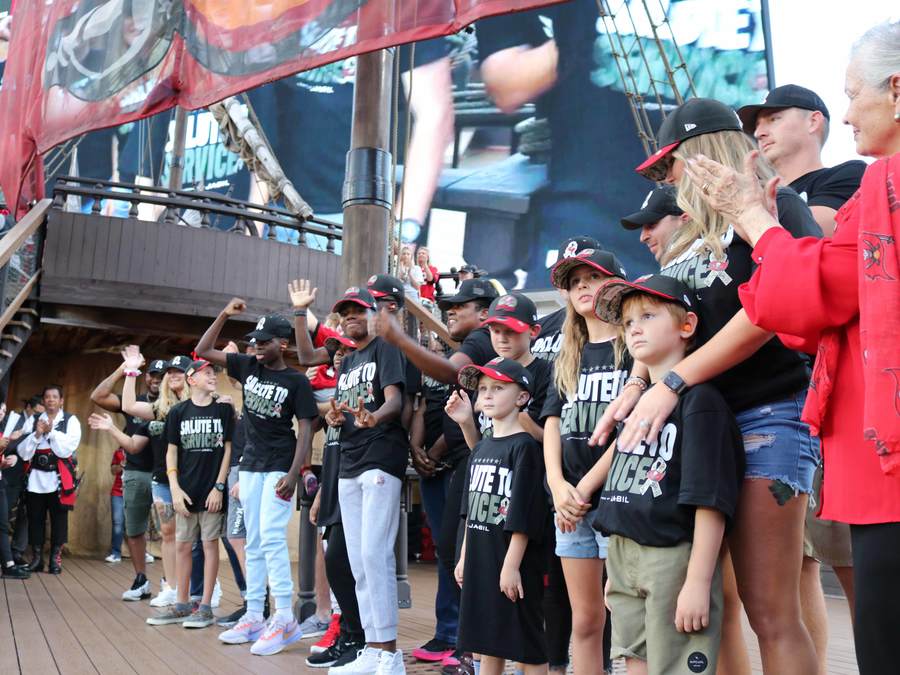 The 2022 General H. Norman Schwarzkopf Military Families of the Year Award recipients were recognized on the Tampa Bay Buccaneers pirate ship during the second quarter of the Buccaneer’s Salute to Service game. | Photo credit Barry Morris

Honorees selected for the General H. Norman Schwarzkopf Military Families of the Year Award were nominated online and selected by USO Central Florida for demonstrating the values of integrity, courage, commitment and service before self while sharing in the sacrifices for our country. This year’s award recipients exemplified dedication to their careers and communities, including volunteering within the local community and helping families in need, hosting numerous school supply and clothing fundraisers for local foster children, and providing mentorship to other military families.

The Buccaneers and the NFL have a long, proud history of supporting our service members who served or continue to serve our country.

The NFL has been a USO partner for more than 55 years, they help strengthen our military by using their platform to connect family, home, and country to our service members and their families no matter where they serve across the globe.