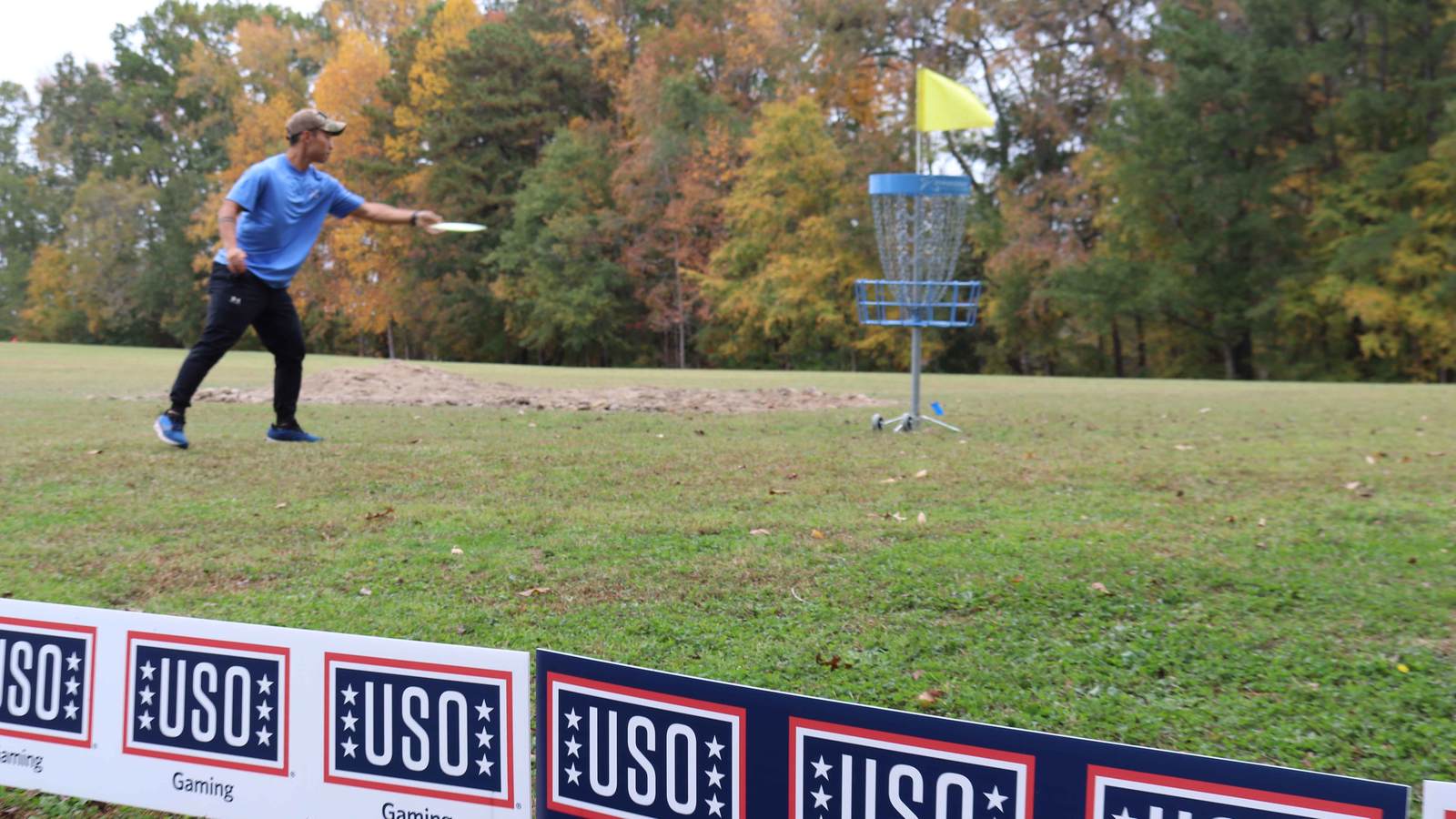 The USO, in collaboration with Prodigy Disc and Eastern Disc Golf, hosted the inaugural ‘Be the Force Open’ USO Gaming Disc Golf Tournament for over 90 professional and amateur Disc Golf players comprised of service members, and local disc golf community throughout North Carolina and Virginia.

The tournament took place at Lake Benson Park, in Garner, N.C., Oct. 29 and 30, were the competitors played 18 holes of disc golf and competed for the top-prize, all while enjoying comradery and the great outdoors.

Over the past five years, disc golf has grown in popularity, and is no longer considered a backyard venture played with a Frisbee. The sport has now developed into a highly competitive sport played in 47 different countries. 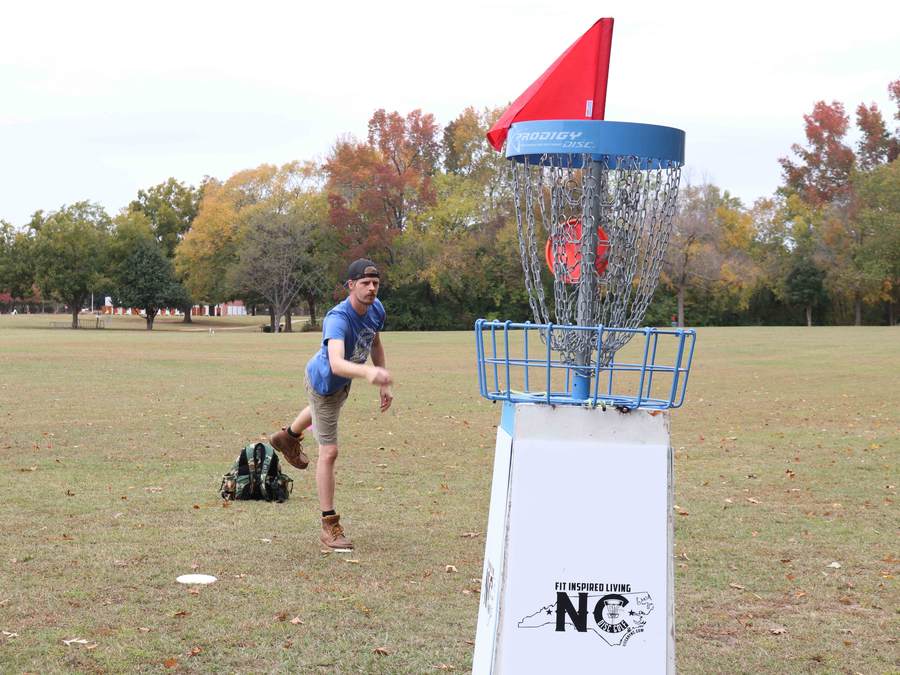 Disc golf is played similar to traditional golf, but with flying discs instead of balls and clubs. Players throw their disc from a designated, oversized tee pad to a metal basket. The goal is to complete the hole with the fewest throws.

According to Sports Illustrated, as the COVID-19 pandemic forced the world to socially distance and avoid indoor gatherings, most if not all major sports were put on hold. However, disc golf – a sport played outdoors and socially distanced even in normal times, experienced extraordinary growth.

“With the onset of the pandemic disc golf has exploded,” said Ross Ledford, USO Southeast Regional Gaming Events Manager. “Being a great option to get outdoors in a socially distant yet fun way, really got a large number of players to pick up disc golf as a hobby, to include myself.”

Disc golf provides service members and their families a fun, healthy escape from the daily stresses of military life. In addition to providing physical activity, the USO’s ‘Be The Force Open’ provided a safe haven for service members to make new friends and forge bonds with other, like-minded individuals. 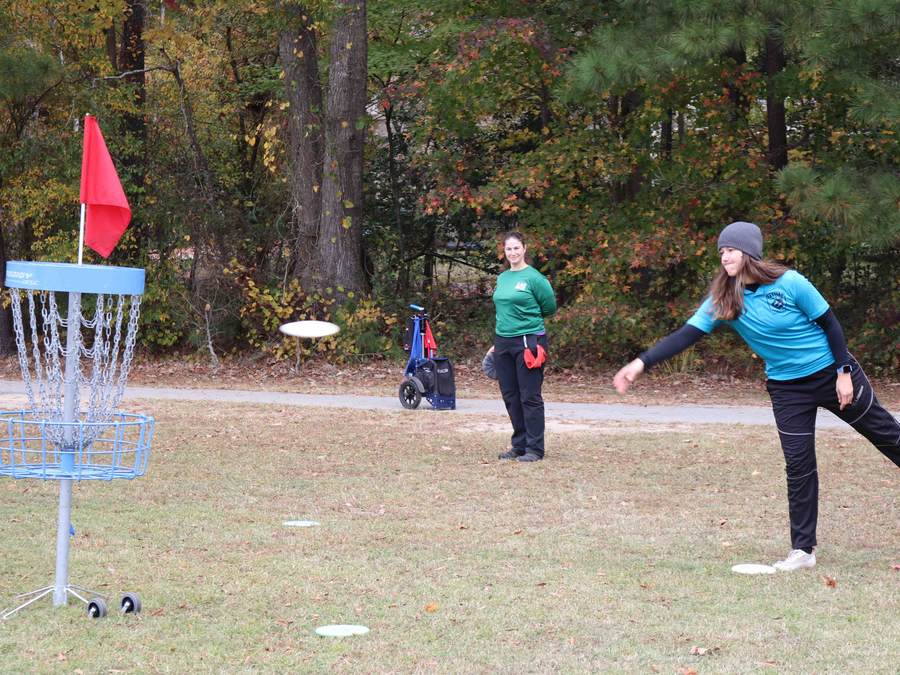 For Gunnery Sgt. Ryan Pennington who competed in the tournament, he finds that disc golf provides an outlet that allows him to let his hair down and relax, while meeting new people in a low-stress environment.

“[Disc Golf] is kind of like ‘exposure therapy’ for me,” said Pennington. “Coming out here, meeting new people, while developing trusting relationships with those who share a common interest as you, really helps me to enjoy my free time.”

Disc golf has also helped recently transitioned service members stay socially connected to the military community, while allowing them to remain physically active, and optimistic while working through the process of healing and overcoming Post-Traumatic Stress Disorder (PTSD).

“Disc golf allows for service members like me to detach from the stresses of the military, combat and/or PTSD,” said Christopher Sieker, a Marine combat veteran who has been playing disc golf ever since a friend introduced him to the sport in 2015.

“Although an individual sport, disc golf helps service members bridge the gap and adapt to society and form another band of brothers in the disc golf community, kind of like how it was in the military,” said Sieker who finished in 11th place in the Male Professional Open (MPO) Division of the Be The Force Open.

Also competing in the tournament were members of Prodigy Disc’s – Prodigy Battalion Team, comprised of active duty, reserve and retired military members who are professional disc golf players who compete in tournaments and help to push the sport forward in military communities, and while deployed.

“I recently got back from Eastern Africa, where the USO played a big role in boosting the morale of my fellow service members and I during our deployment to Camp Lemonnier, Djibouti,” said Sgt. Isaac Frazier with the Virginia National Guard who traveled from Lynchburg, Va., to compete in the tournament as a member of the Prodigy Battalion Team. 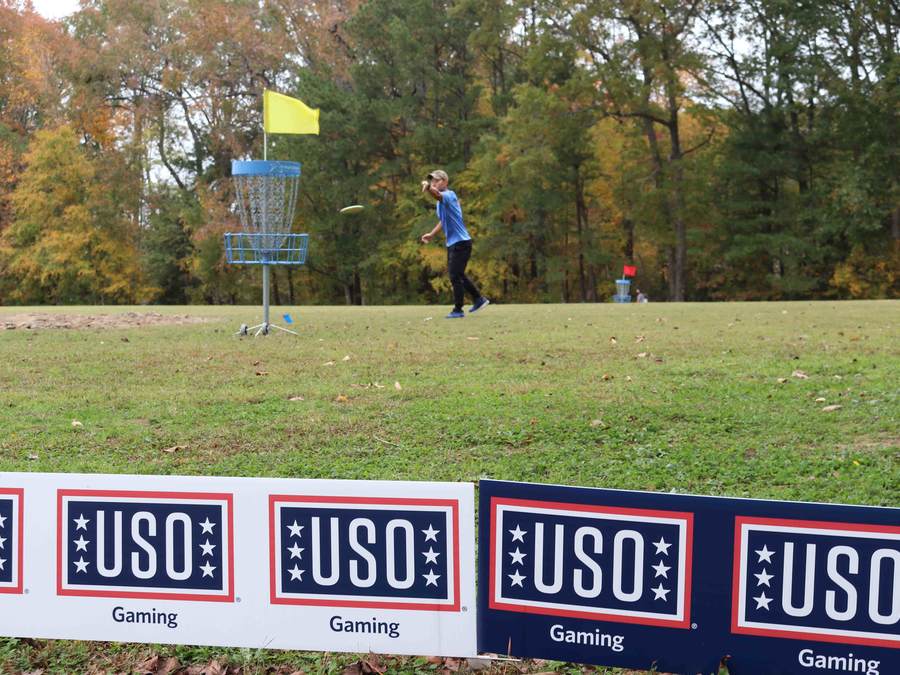 Sgt. Isaac Frazier with the Virginia National Guard, and member of the Prodigy Battalion Team practices putting during the USO’s inaugural Be The Force Open held in Garner, N.C., Oct. 29 and 30, 2022. | Photo credit Barry Morris

“In Djibouti I was at a distant outstation where it was over 100 degrees, I tried playing disc golf there, but it was way too hot. However, having the USO there to provide a cool airconditioned space to hang out in and enjoy a cold beverage, made us feel appreciated knowing people [USO staff and volunteers] were there for us,” said Frazier who finished in 7th place in the MPO Division of the Be The Force Open.

As the sport of disc golf continues to grow, the USO is looking at ways to expand disc golf courses or conduct tournaments at military installations across the globe where there is a USO Center nearby.

“Disc golf It is the perfect opportunity to step away from everyday life and into nature where you can disconnect and relax,” said Ross. “With disc golf being a solo sport, it also gives a healthy competitive outlet while also improving individually.”

“The USO is definitely going to continue to grow our impact on disc golf as it a great connection point for the USO to show our support of active duty military and their families.” 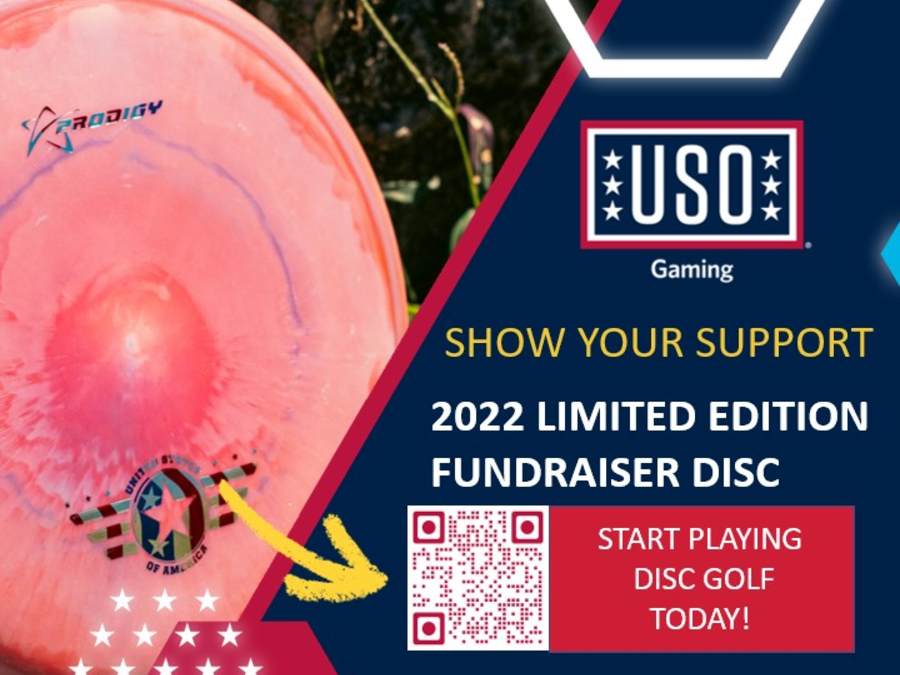