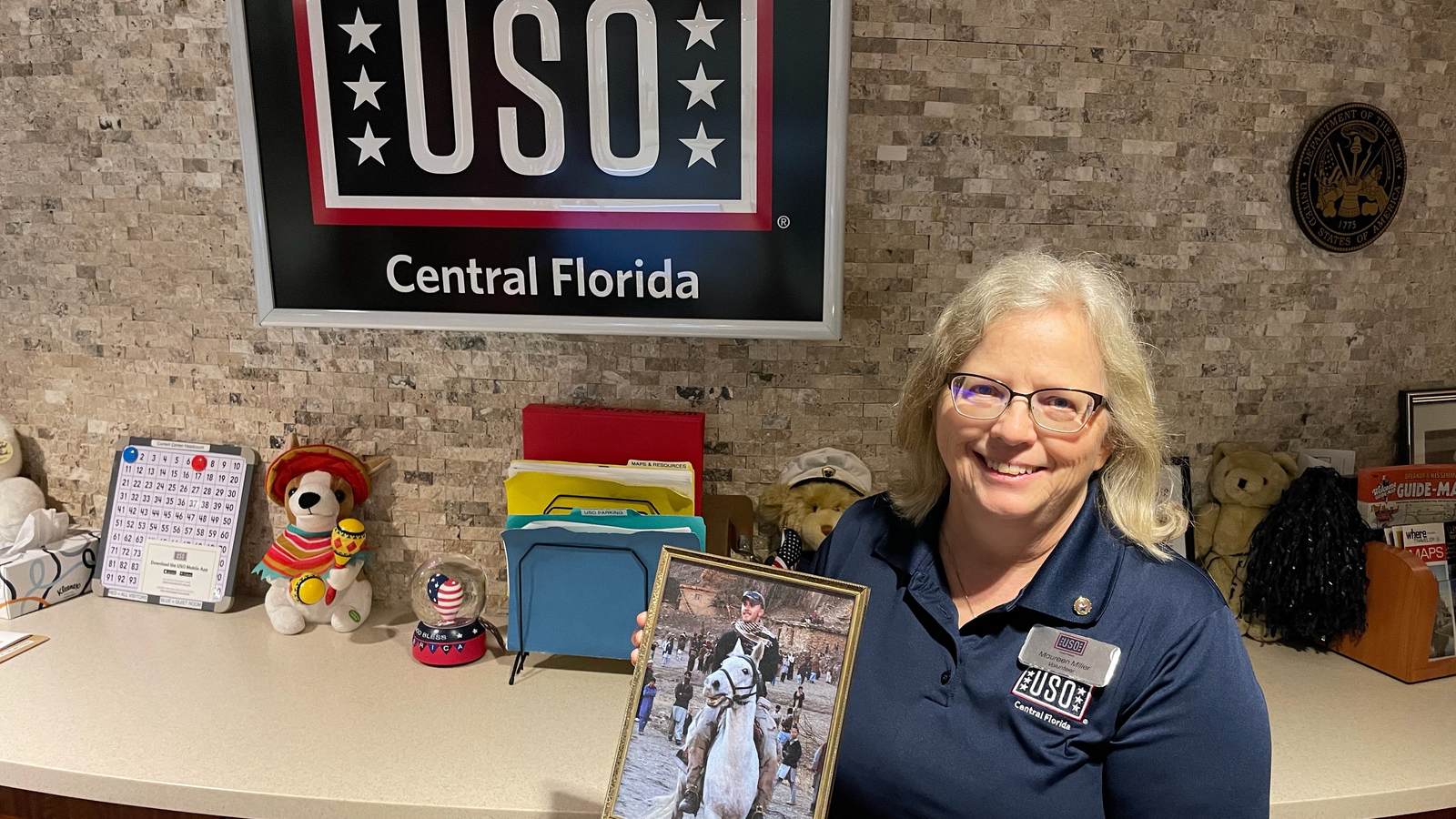 No one wants to be a member of a Gold Star Family.

The title, which is reserved for the families of military members who have died in the line of duty, is meant to honor the service member’s ultimate sacrifice while acknowledging their family’s loss, grief and continued healing. 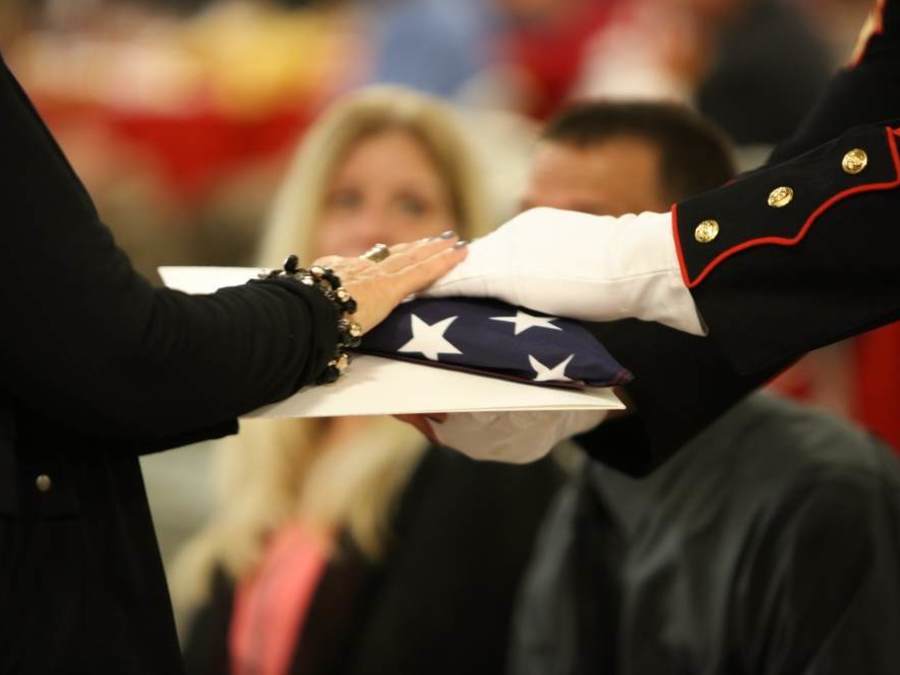 Although the tradition has its roots in World War I, the first official acknowledgment of this kind was in 1936, when President Franklin D. Roosevelt declared that Gold Star Mother’s Day would be observed the last Sunday of every September. In 2009, President Barack Obama amended the holiday to extend the recognition to all family members of a deceased service member.

But for these families, being a member of a Gold Star Family – whether they be a spouse, child, brother, sister, parent or other relative – is not reserved for just one day in September. The pain of losing their loved one is a constant one, something to be faced each and every day after the passing of their service member.

These military families deserve support throughout their entire military journey – and that includes the moment they are notified of their loved one’s passing. And the USO is with them every step of the way.

When a service member is killed in the line of duty, there is a formal process for their return home to their families, which includes a dignified transfer through Dover Air Force Base in Delaware.

The USO stands steadfast beside our nation’s military families throughout every step of their time in service – and especially in times of great sorrow. When tragedy befalls a service member, the worlds of their many loved ones come to a halt. Our caring USO staff and volunteers are prepared to provide assistance to these Families of the Fallen – also known as Gold Star Families – both on their travels to Dover Air Force Base and upon their arrival. 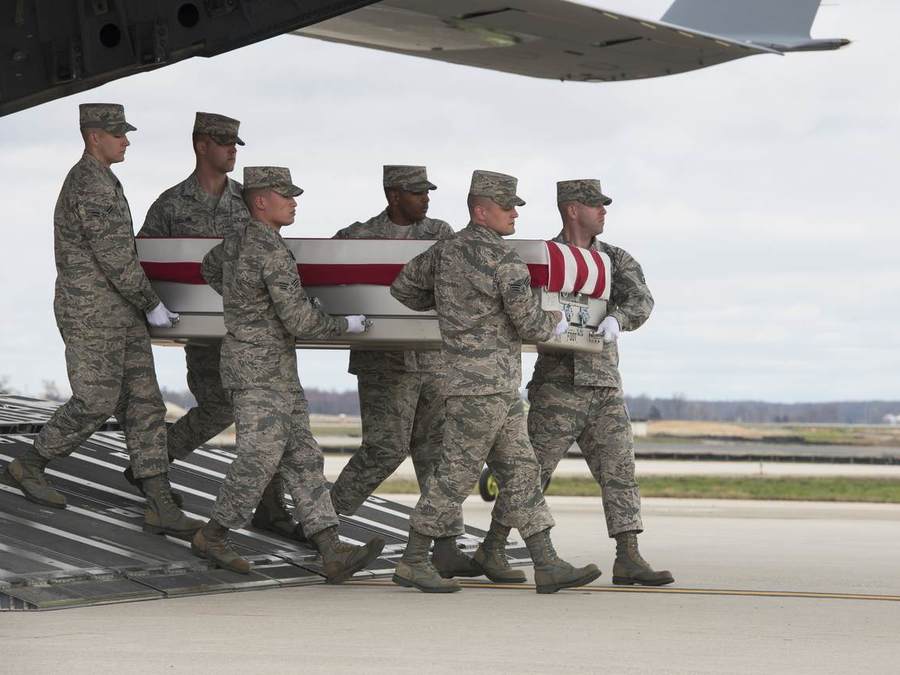 Depending on the circumstances, the notification of the loss of a loved one in service can often be short notice, giving some families and spouses only 24 hours to prepare to travel across the country – or the world – to be there for their service member’s arrival. The travel process itself can be difficult, with the added stress of rearranging personal schedules and making connecting flights in time, all while grieving the unexpected loss of their service member.

Amidst the shock and grief of having lost a loved one, the journey to Dover can be an overwhelming one for Gold Star Families. That is why, although they are escorted by a military casualty officer during their travels to Dover, grieving military families can also lean on USO and its vast network of support, which has been assisting Gold Star Families for the past 30 years.

As soon as a dignified transfer is set into motion, a military liaison contacts USO Delaware, informing the team of the Gold Star Family’s travel plans to Dover. USO Delaware then contacts any USO airport centers that are in the family’s flight plan, alerting them of the family’s arrival and creating a network of USO support for the family along their journey. 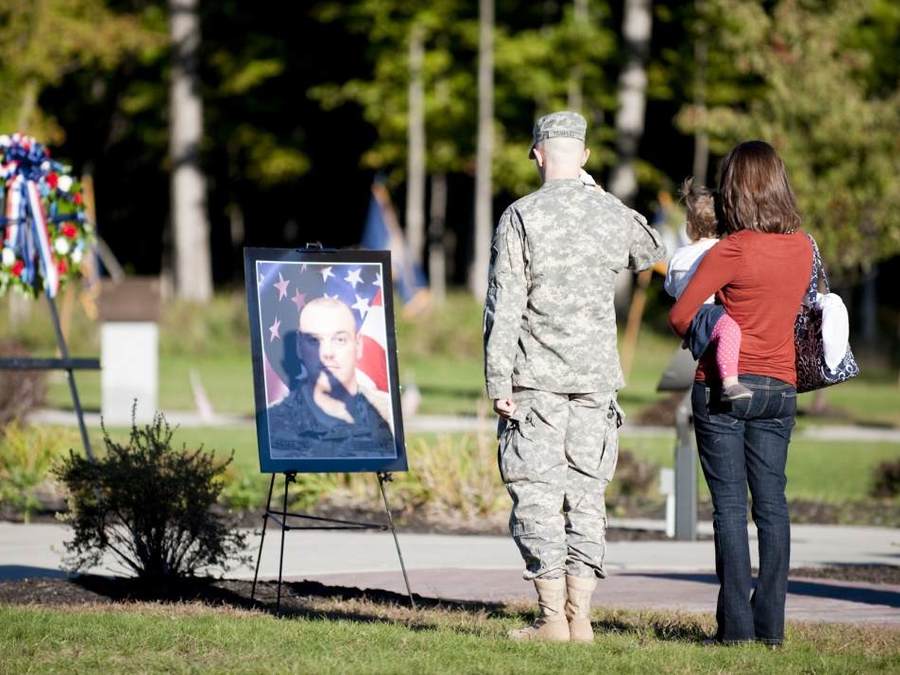 The USO aims to alleviate many of the logistical hurdles Gold Star Families must endure throughout this process, so that these families have space to grieve. This can include everything from assisting Gold Star Families along their journey to the dignified transfer through a vast network of USO airport centers, to providing the families with free Wi-Fi, computer and telephone access, to offering refreshments so that families and friends may spend their time properly grieving and honoring their fallen hero.

Upon arrival in Dover, USO Delaware continues to offer these families support in collaboration with the Fisher House, a nonprofit that provides comfort homes for military families to stay in when a loved one is receiving medical treatment, or in this case, is arriving for a dignified transfer.

No matter what the hour or the need, the USO is there for Gold Star Families.

Although the grieving and healing process is a personal one for each family member, many Gold Star Family members have found comfort and healing by continuing to serve their military communities as USO Volunteers.

For Toni and Craig Gross, they will always remember their son, taken too soon, and honor him by both serving as USO Volunteers at their local USO Center at the Tampa International Airport in Florida. 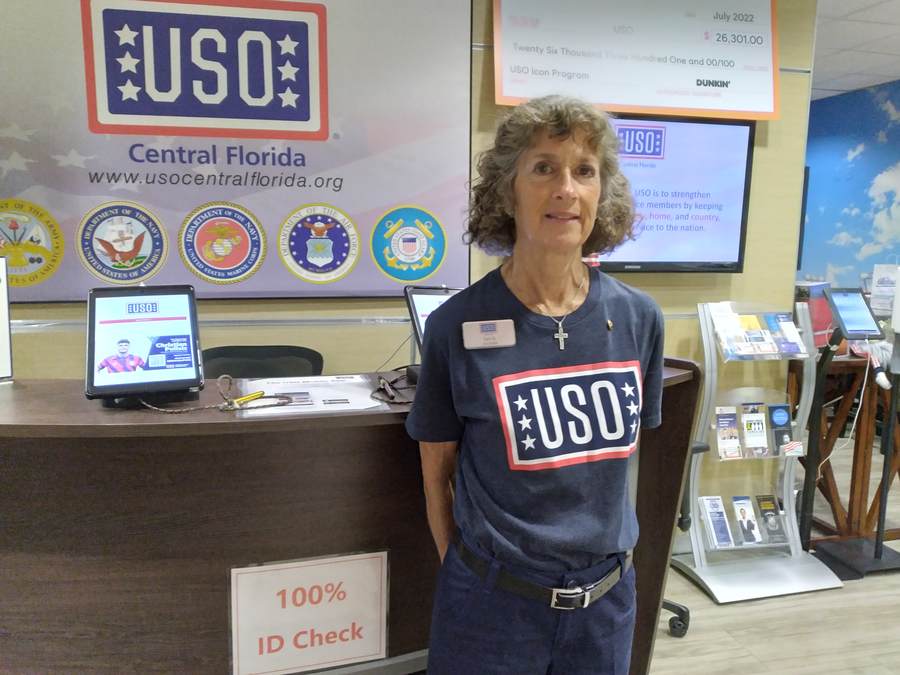 The USO provided Toni Gross and Craig with support as they traveled to Dover to be present for their son’s dignified transfer. | Photo credit USO Courtesy Photo

“Serving promotes healing,” said Toni. “I do it in my son’s memory.”

Toni and Craig lost their son, Army Cpl. Frank Gross, on July 16, 2011, when he was killed in action while serving in Afghanistan.

Prior to losing their son, Toni and Craig had little knowledge of the USO. However, that soon changed after they experienced the network of support at USO airport centers along their journey to Dover, to be present for their son’s dignified transfer.

“The USO at the Philadelphia airport protected us from staring eyes and provided us [with] a safe haven during a dark time in our lives as we traveled to Dover for Frankie’s dignified transfer,” Toni said.

Months after their son’s dignified transfer, the Grosses experienced a time of great sorrow, and they sought ways to find emotional healing and connection with the military. They soon discovered that they had an overwhelming urge and higher calling to serve and give back to their local military community. 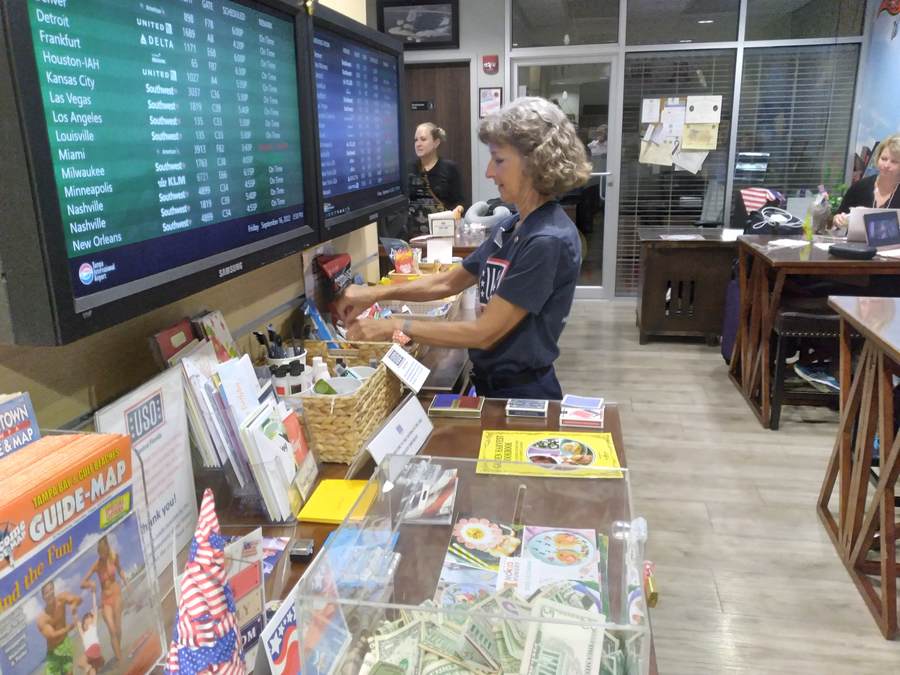 “To be completely honest, we struggled with the loss of our son,” Toni said. “My husband Craig struggled a while longer than I did, but I prayed about it, and then one day God spoke to my heart, guiding me to give back to my community in order to find healing, and based off my experience traveling to Dover, I knew the USO was an organization I wanted to volunteer with and serve the military community through.”

Both Toni and Craig began volunteering with the USO. Given Craig’s culinary background of working in the food service industry for 30 years, he took an additional, slightly different approach in honoring his son’s memory and opened a barbecue restaurant in Frankie’s honor.

“The mission of the USO … all revolves around ‘service’ and honoring our service members, their families and our fallen,” said Craig. 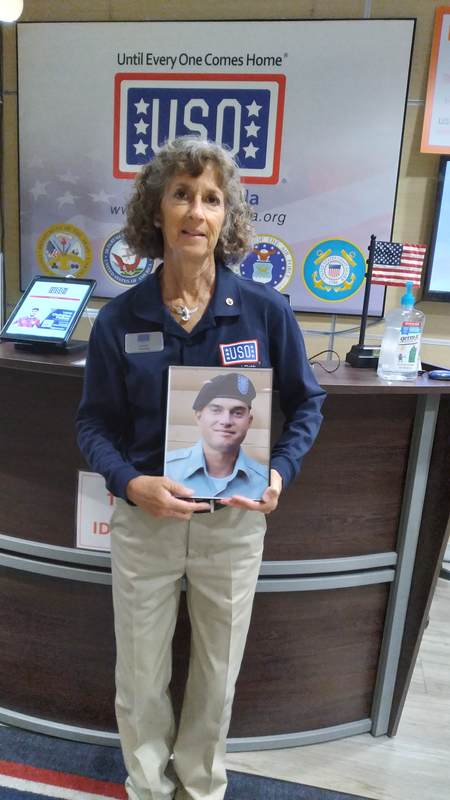 After the loss of a military family member, it may be difficult for Gold Star Families to still feel as if they are a part of the larger military community that they’ve been in for years, but by volunteering with the USO, these families can rediscover that feeling of community and connection.

“There is something special and unique about serving and giving back to the military community,“ said Toni. “The smiles from the young military families, children and troops traveling through our USO airport center really warms the heart and spirit, knowing we are providing a safe and welcoming environment for them.”

Toni and Craig are not the only Gold Star Parents who found healing by volunteering with the USO.

Maureen Miller currently serves as a USO Volunteer at the USO center at Orlando International Airport. Her son, Army Staff Sgt. Robert J. Miller, was killed in action in Konar Province, Afghanistan, on January 25, 2008, and was posthumously awarded the Medal of Honor.

Maureen is no stranger to the idea of serving in the military. Her family has a long history of serving our country, dating as far back as the Revolutionary War and all the way up to Operation Enduring Freedom, where she lost her son Robert. Two of her children are also currently serving in the U.S. Armed Forces, with one son in the Navy and the other in the National Guard. 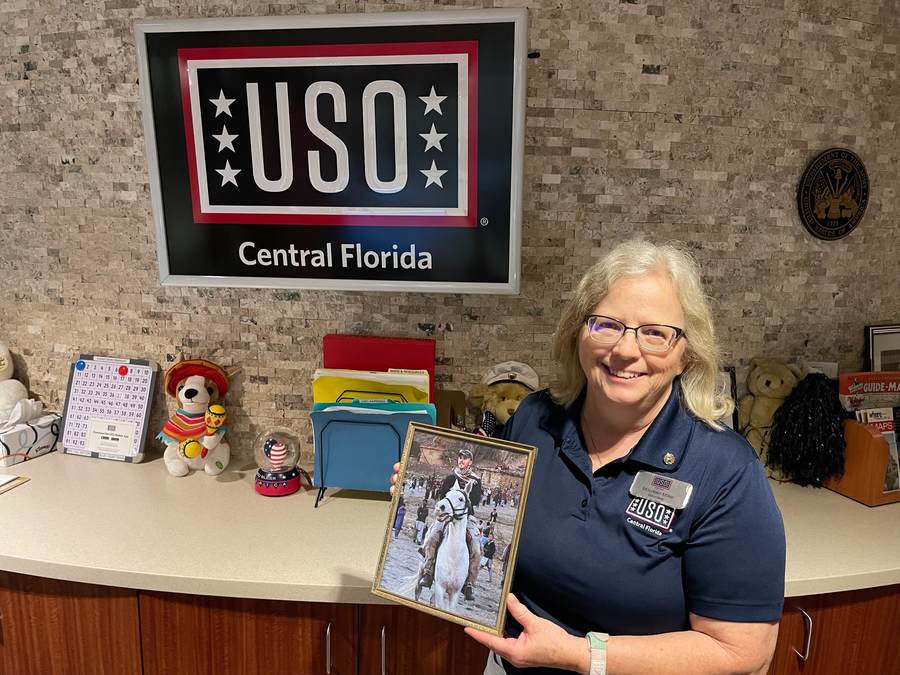 A mother of eight, with children still in elementary school when Robert died, Maureen was unable to travel to Dover for his dignified transfer, as she still had a household to run and children who needed her and her husband.

“I didn’t have time to lay in bed all day and feel sorry for myself, I had to be strong for my other children and ensure their lives weren’t disrupted too much as we all coped with the heartbreaking loss of Robert,” Maureen said.

Although others may be able to sympathize with the loss of a loved one, only other Gold Star Family members can truly understand the shock and pain that comes with losing a loved one while they served in the military. That’s why it’s so important for Gold Star Families to find comfort and strength from each other – and that is exactly how Maureen became involved with the USO.

“I remember Robert telling me about the USO during his military travels,” said Maureen. “He would always stop in and hang out for hours waiting for his flights at the USO centers in the airports he would travel through, but I never would imagine I would be a USO volunteer today.”

When speaking about volunteering with the USO, Miller shared that “it’s worthwhile, you feel valued and appreciated here.”

At the USO, we often say that when it comes to our nation’s service members and their military families, we are “always by their side.” From the moment they join, through assignments and deployments, to the last day they don their uniform, the USO is there to support them through every step of their military journey.

Unfortunately for some, that journey may include the loss of a loved one. But through this too, the USO remains steadfast in its support, knowing that Gold Star Families remain a part of our military community even after the loss of their service member, and that we will continue to stand by them and help them, even on their darkest days.