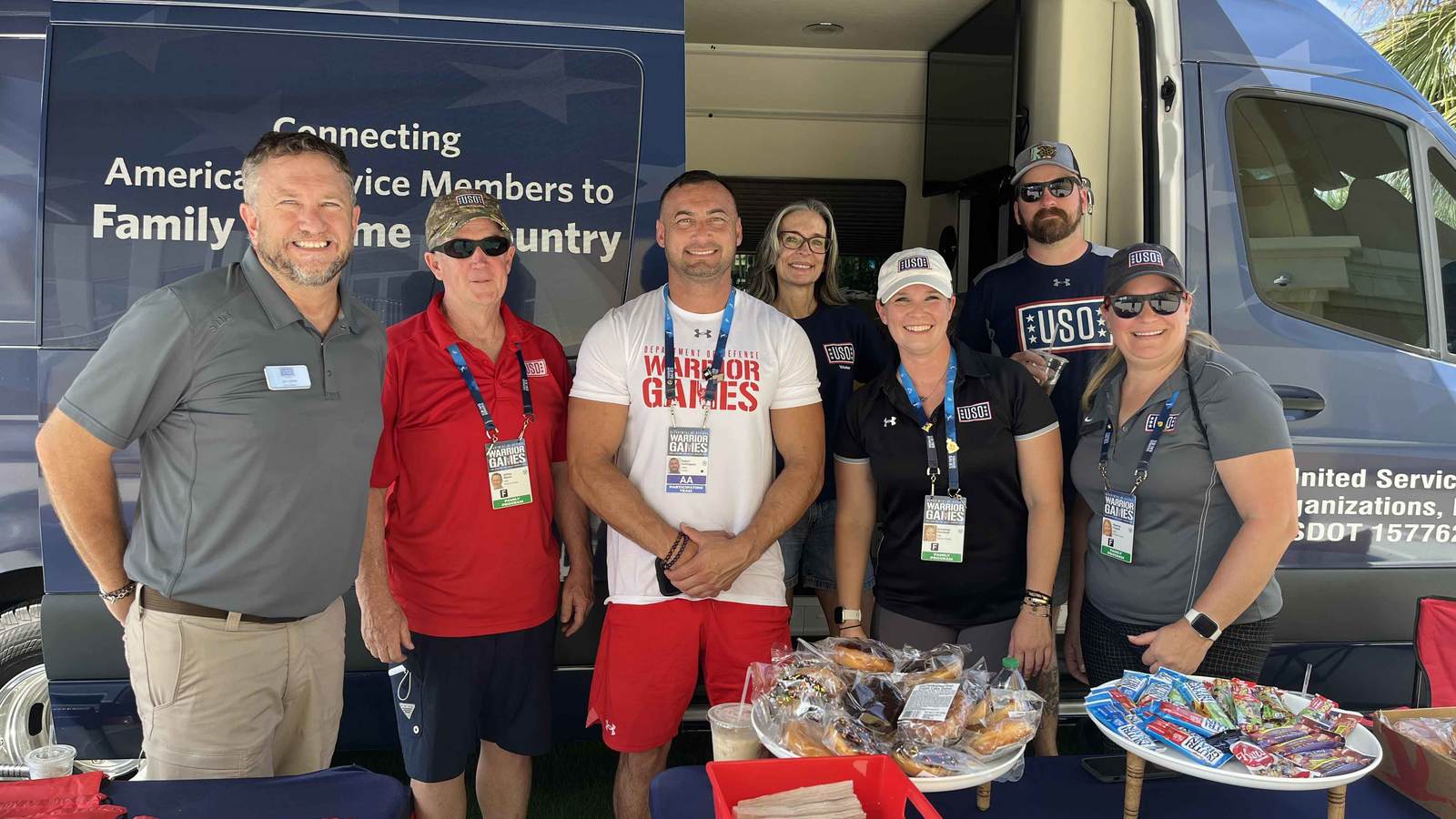 There are many stages of the military journey – from those first days of enlistment and bootcamp, filled with nerves and anticipation, to months-long deployments overseas, to finding a new path in the civilian workforce after separation, each stage presents its own unique challenges and triumphs. Since 1941, the USO has been committed to strengthening America’s military through every step of their military journey – including when service members have been injured in the line of duty.

And this year, at the 2022 Department of Defense (DOD) Warrior Games, the USO in coordination with the local USO Center in Central Florida continued to do just that.

From 2001-2018, more than 53,700 U.S. service members were officially listed as wounded in the major war zones of the Middle East. Of these injuries, many of them have been quite serious. Between 2001 and 2018, a total of 1,705 service members sustained lower and upper limb amputations during deployment. According to the Defense and Veterans Brain Injury Center, there have been more than 380,000 traumatic brain injuries (TBIs) among service members since 2000.

Supporting the thousands of service members who have been injured in the line of duty – both with visible and invisible wounds – is crucial. And many have found comfort in participating in the DOD Warrior Games as athletes.

The DOD Warrior Games showcase the resilient spirit of these athletes – all of whom have made sacrifices in service to our nation. Competing athletes come from all branches of the U.S. military, as well as from the nations of our allies and partners, to include wounded Ukrainian service members this year.

The athletes who compete in the Warrior Games are inspirational, demonstrating that they can overcome almost any obstacle and achieve greatness. Each year, they join the games to compete in adaptive sporting events such as wheelchair basketball, cycling, indoor rowing and wheelchair rugby, among others. According to the DOD Warrior Games, these competitions are designed to enhance the recovery and rehabilitation of wounded warriors, and build strength, endurance and camaraderie among participants.

The USO was honored to support this year’s DOD Warrior Games hosted by the U.S. Army at the ESPN Wide World of Sports Complex at Walt Disney World Resort on August 19-28, 2022. 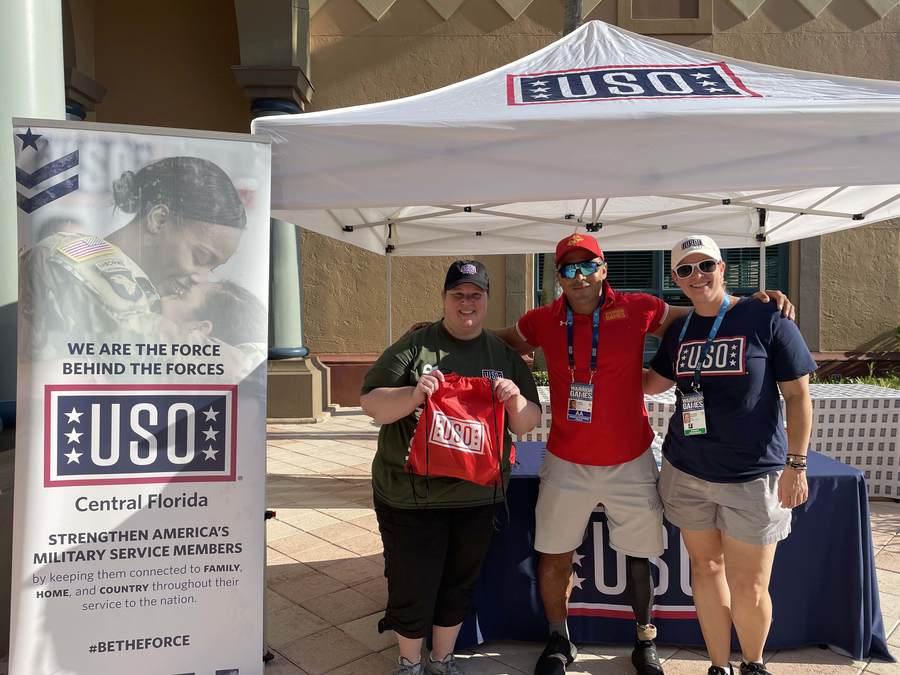 How the USO Supports Wounded Service Members at the Warrior Games

Upon the request of the U.S. Army, a team of USO staff and volunteers from USO Central Florida and across the U.S. Southeast region coordinated the USO’s support of competing service member athletes and their families during the 2022 DOD Warrior Games.

A Mobile USO Sprinter Van, part of the Mobile USO fleet of “centers-on-wheels”, arrived at the games, where it supported approximately 2,000 competing military athletes, families and friends. Inside the van, which has many of the same amenities of a brick-and-mortar USO center, visitors could take advantage of USO-provided healthy snacks and refreshments, as well as learn about the other programs the USO offers to service members and their families.

“It was amazing being able to spend time with the athletes and their families over the course of ten days because we were able to make such personal connections,” said Annamae Kacsandi, the center operations and program manager of USO Central Florida. “This was such a unique experience, as it allowed for the USO to be collaborative across multiple USO Southeast Region locations, and I am so grateful for the opportunity to work with so many wonderful USO staff members and appreciate their support in making the 2022 DOD Warrior Games a success.”

In addition to supporting the athletes via its Mobile USO unit, the USO also supported the 2022 Warrior Games’ Family Program through the Fisher House by hosting a poster-making party, where families of the athletes could use arts and crafts materials to create motivational signs to cheer on their family member as they competed in this year’s games. 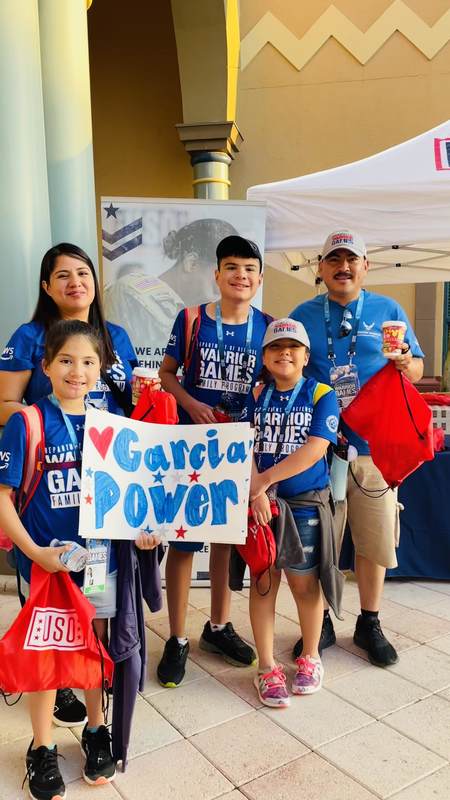 The USO also provided an Outdoor Adventure Team (OAT) Recovery Area, outfitted with mobile state-of-the-art NORMATEC recovery chairs; that is, zero gravity chairs, which help relieve pressure and strain on the body; as well as leggings that use dynamic air compression to advance an athlete’s wellness and ability to recover faster – all of which can improve their training, maximizing their performance during the games.

“I have been using these recovery chairs for the past two days, and they have definitely increased my rowing power and recovery time, said Marine Staff Sgt. Robert Dominguez, who competed in field, swimming, track, archery, cycling, indoor rowing, powerlifting and shooting during the games.

“I truly appreciate everything the USO is doing for us out here.”

Two wounded warriors and 2022 Warrior Games athletes currently living in the Norfolk, Virginia, area have relied on the USO not only during the games, but also at home via their local USO centers, which supported and helped them prepare for this year’s Warrior Games.

Tech. Sgt. Raina Stroman, a wounded Air Force veteran who suffers from invisible wounds associated with post-traumatic stress disorder (PTSD), is grateful to her local USO staff and volunteers, who supported her as she prepared helped her to compete in multiple events including archery, cycling, field, indoor rowing and powerlifting during the 2022 Warrior Games. 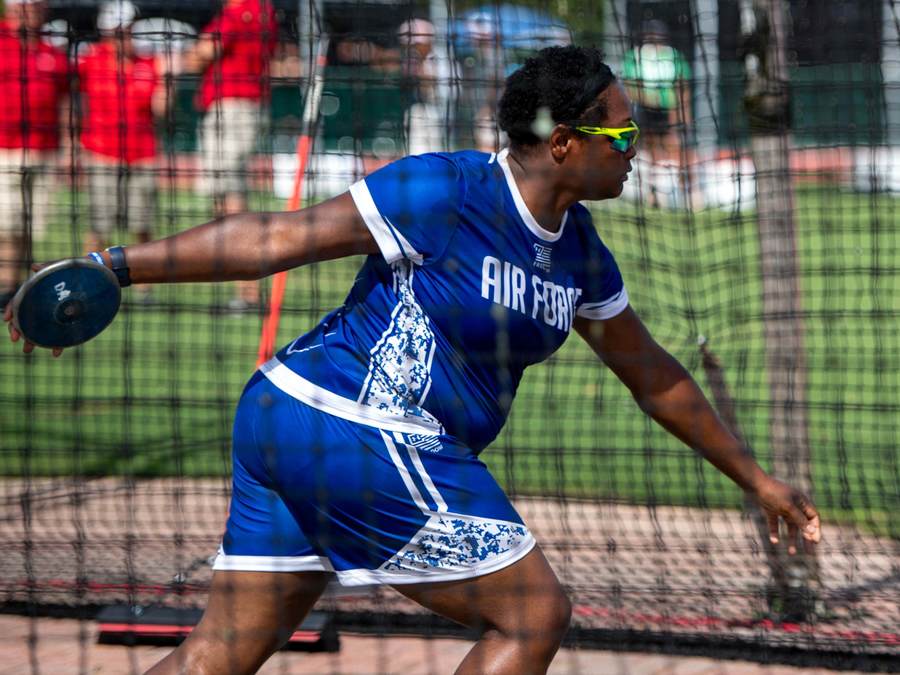 “The USO has always been there for me when I needed them most,” said Stroman who competed in the DOD Warrior Games for the first time this year.

“The USO Hampton Roads and Central Virginia staff and volunteers have treated me like family and provided me with the encouragement, support and space I needed to prepare for this year’s games.”

Information Systems Technician 1st Class Ruth Freeman, an active-duty sailor and wounded warrior competing in her second Warrior Games, competed in cycling, field, indoor rowing, shooting, track and sitting volleyball. As a resident of Norfolk, Virginia, she also benefited from the local USO’s support, which helped her prepare for this year’s Warrior Games. 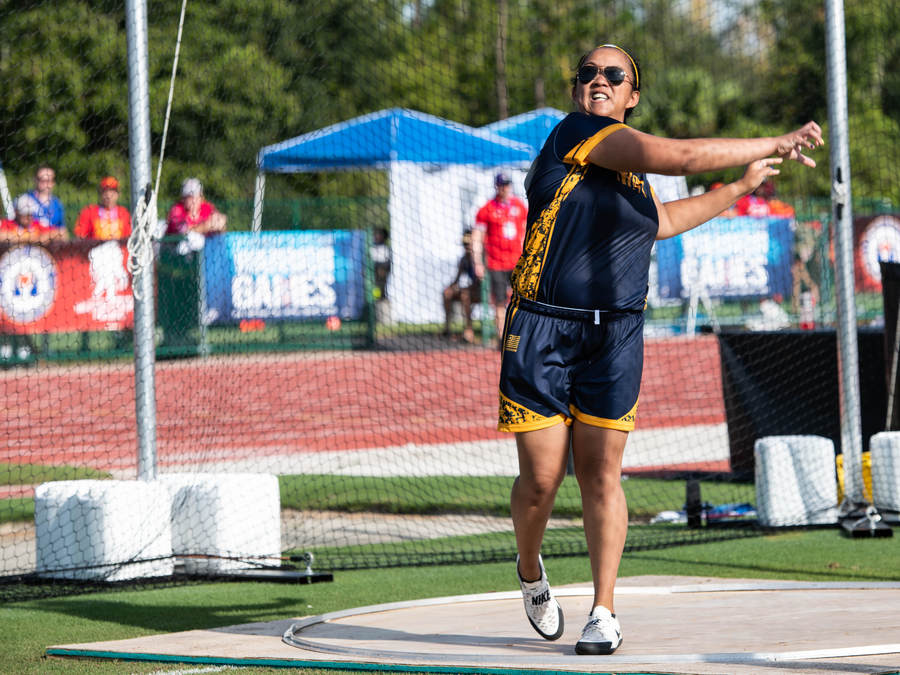 “The USO has been totally amazing to me, said Freeman. “They have been my home away from home during my recovery, and I cannot thank the USO enough for your support and allowing me to use your centers, and for being down here during the games this week, [the USO is] literally everywhere.”

How the USO Supports Wounded Warriors Beyond the Games

The USO is committed to the resiliency and well-being of our service members and their families. Beyond the excitement of the DOD Warrior Games, the USO also supports injured, ill and wounded service members at our USO Warrior Centers and USO Warrior and Family Centers.

USO Warrior and Family Centers at Fort Belvoir, Virginia; Bethesda, Maryland; and San Antonio, Texas, as well as the USO Warrior Center at Landstuhl, Germany, were built to support wounded service members and their family members who visit in between medical appointments at nearby military medical centers.

After all, in the case of severe injuries, extensive surgery and treatment is often needed, sometimes taking 12 to 18 months for recovery. Invisible wounds can also require lengthy recover times; in fact, according to the Military Health System, in one year alone, mental health issues accounted for the largest total number of hospital bed days in the military hospital system, and the third highest total number of medical treatments for all active-duty members of the Armed Forces.

Recovery from these wounds or illnesses can be a long and difficult journey for any service member, made even more difficult by being far from home. However, at USO Warrior and Family Centers – often located just a short distance from major military medical centers – service members can find a sense of home and comfort while they recuperate – and that can make all the difference.

USO Warrior and Family Centers are ADA-compliant, ensuring that all – regardless of their recovery journey – can access the building. This intentional design means that everything, from the programs offered to the structure of the building itself, is offered with the intention of catering to wounded service members and their caretakers, making these USO centers truly unique. 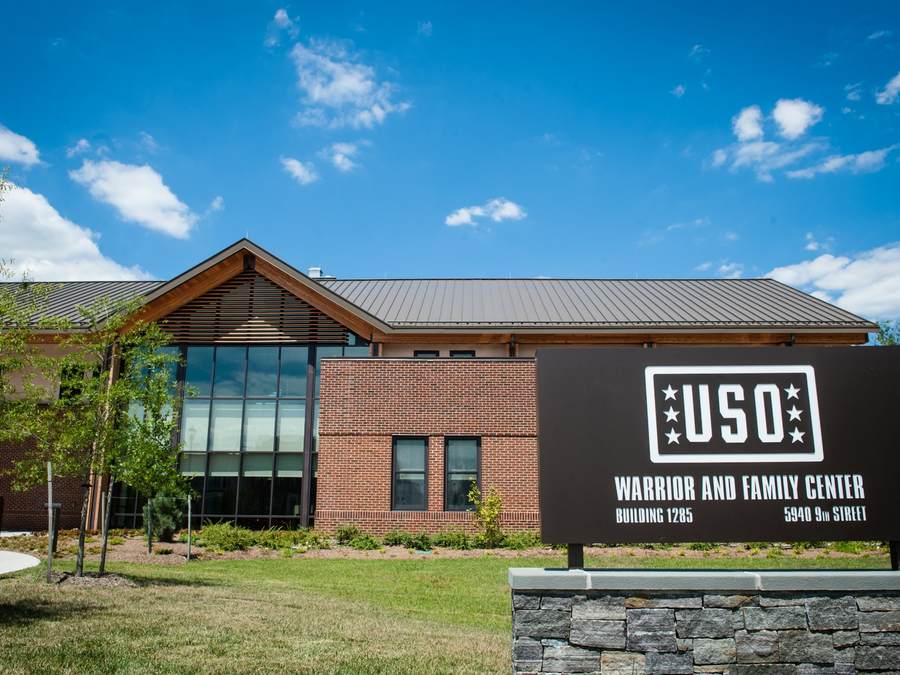 The programs, services and amenities offered within the welcoming space of these centers are all created to provide this sense of home to recovering service members and other members of the military community. Amid the comfortable couches USO Warrior Centers also provide a fully-equipped kitchen, which service members, military family members and caretakers can use to cook homemade meals – a welcome break from hospital food. Additionally, there are always snacks and beverages available in the kitchen as well and, on many nights, USO staff cook up their own meals, or bring in popular food from local restaurants, to serve to these military community members.

Programs are created purposely to assist service members with their recovery, such as the center’s art and music rooms. In these specially-designed rooms, service members can partake in classes on painting, sculpting, drawing, crafting and more, providing them with a creative outlet to express themselves. An art class might seem simple at first glance, but studies show that art can be incredibly helpful in reducing stress and anxiety, and it has shown promising results particularly in supporting service members and veterans struggling with PTSD.

Recovering from serious wounds or illnesses can be an incredibly challenging experience that can take a physical and emotional toll on service members and their families. By providing them with a place to call home while they recuperate, USO Warrior and Family Centers help ensure that these troops have the resources they need to make a full recovery.

The USO was honored to support wounded service members and their families and caretakers at the 2022 DOD Warrior Games in Orlando, and we are honored to support them every day at our USO Warrior and Family Centers all around the world.