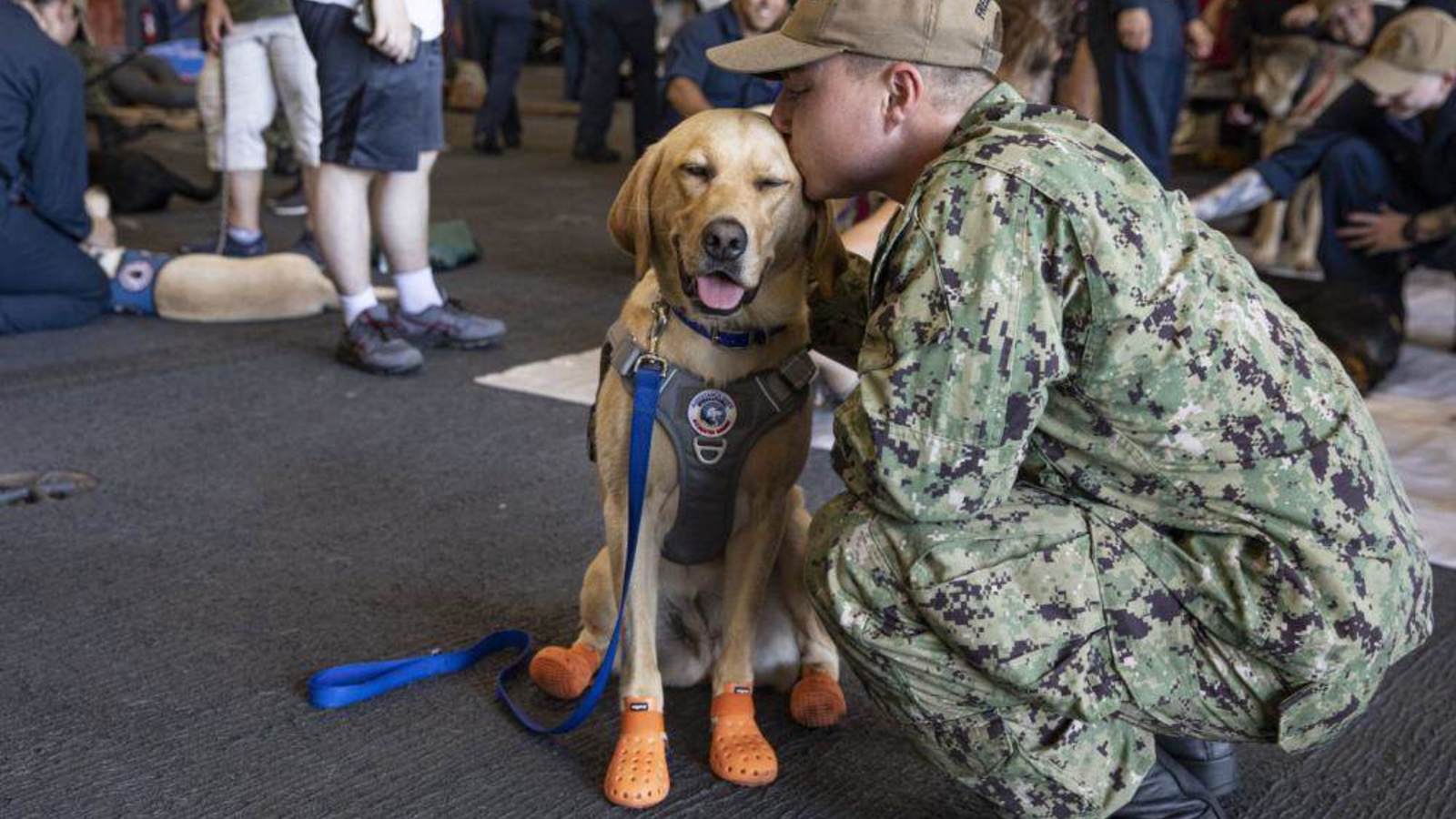 Wagging tails and smiling faces have filled the hangar bays of the Nimitz-class aircraft carrier USS George H.W. Bush once a week throughout July 2022 as the ship prepares for an upcoming deployment. These canines welcome visitors to the ship, increasing morale, joy, connectedness and toughness while decreasing stress for sailors as the ship wraps up preparations for deployment.

The visits are the results of both strategic partnerships and collaborations between the ship, Avenger family members, Mutts with a Mission, Crisis Response Canines and the USO of Hampton Roads and Central Virginia.

These pups are brought to various locations to help serve the USO’s mission of supporting service members and military families. For sailors who are preparing to be out at sea for months on end, far from loved ones, providing them with opportunities to reduce stress and boost morale is crucial. 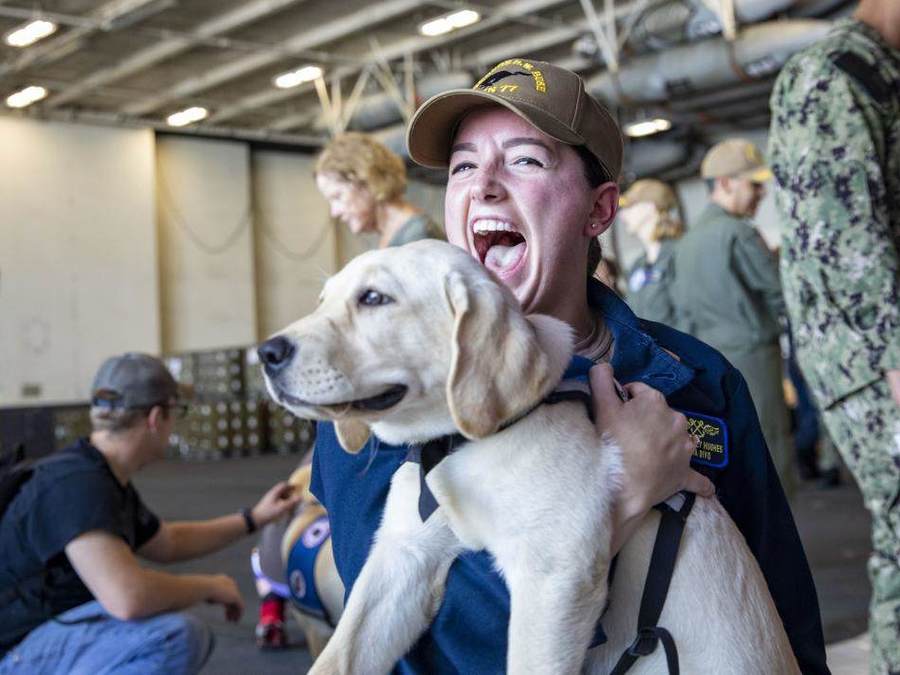 Ens. Sydney Hughes smiles while hugging a pup brought to the Nimitz-class aircraft carrier USS George H.W. Bush as part of a collaborative effort between Mutts with a Mission, Canine Comfort, Crisis Response Canine and the USO of Hampton Roads and Central Virginia to increase morale, joy, connectedness and toughness of the crew while decreasing stress for sailors. | Photo credit DVIDS/Petty Officer 3rd Class Novalee Manzella

Research shows that therapy dogs can lower blood pressure, reduce loneliness and alleviate stress – all things that can impact the physical and mental health of the Armed Forces. With the stress and pressure that comes with protecting our nation, facilitating therapy dog visits allows sailors to decompress, or even keep them feeling connected to home, for those who are far away from their own dogs.

“A lot of people already sent their dogs to other places in preparation for deployment,” said Lt. Sarah Faber, assistant air operations officer for George H.W. Bush and a key organizer of the program. “You don’t always realize the place that your animal holds in your life. They have an incredible impact on life and stress management because of the unconditional love they give.”

The partnerships between the USO and these various therapy dog organizations began with an idea from a military spouse that then led to discussions with organizations from both inside and outside the ship – and ended with puppies in the arms of sailors in the hangar bay. Its success is already driving interest among other commands in the region who began requesting visits from the dogs and volunteers as well. The spark of ingenuity and drive toward an achievable, worthy goal is an example of how each sailor or family member of a ship plays a significant role in creating the environment for which they want to serve and work within.

Much like the Avenger crew reflects the best elements of team – the whole of the diverse group of sailors is greater than the sum of its parts - the ship’s collaborations with community partners, its Family Readiness Group and Ombudsmen deliver incredible value to the crew who will deploy as the warriors, leaders, teachers and ambassadors of America. 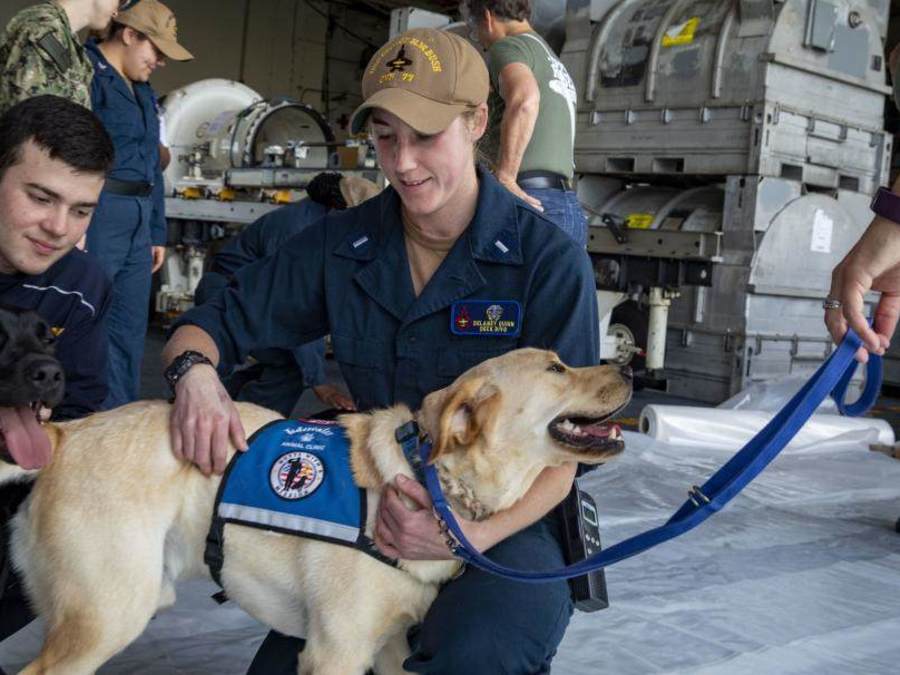 And it isn’t just the ship’s sailors and leadership team that are taking notice of the impact the furry friends have on the crew.

“It has been a great experience getting to watch the canines strengthen the moral, well-being and mental health of the sailors on the USS George H. W. Bush,” said Emily Ramsey, an operations specialist with the USO of Hampton Roads and Central Virginia.

“Seeing a sailor come up to the group of dogs with the joy and comfort on their faces is like no other. What is even better is when the sailors sit down, get comfortable and really connect with the dogs. It gives them a sense of home.”

The extension of the program beyond a single-day event is particularly beneficial to the crew. In just a short time, sailors built bonds with the puppies who came a week earlier, which is helping them connect and express emotions in a way they cannot otherwise,** thus opening doors for dialogue and forging connections between shipmates.** It also helps forge relationships between sailors, Avenger family members and the organizations involved for future collaboration after deployment. 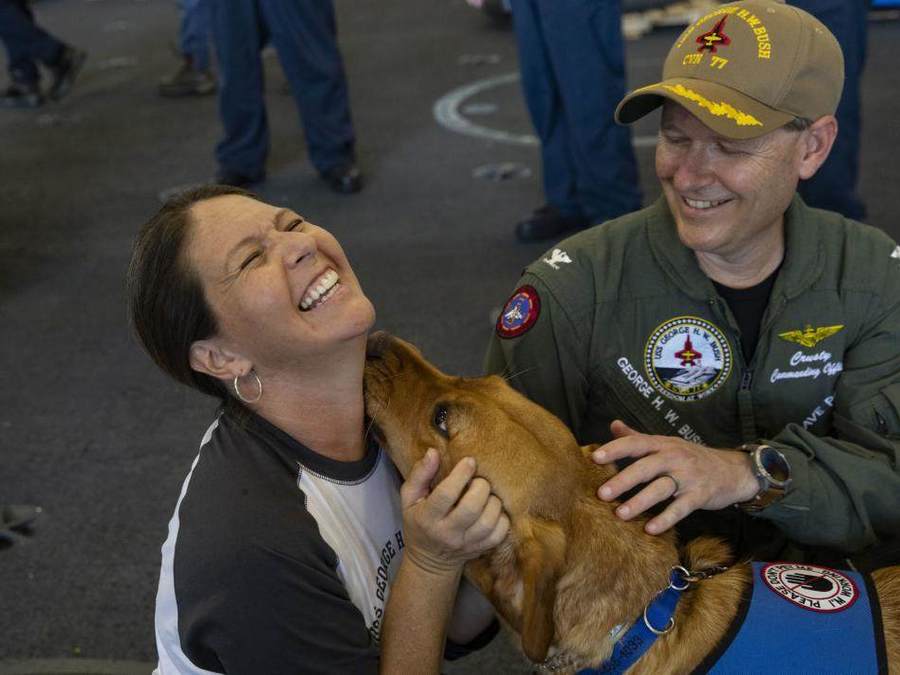 “After the first couple of discussions, I was encouraged that we were moving forward, but I was concerned that we weren’t going to have enough dogs to support what we were looking to do for the crew,” said Jen Pollard who helped to spearhead the effort.

“But as we continued to press forward and support began to develop organically, it really took off. The opportunities for long-term relationships between our sailors and their families and these organizations and the faces of the sailors as they meet the dogs each week make it all worth it.”

And while the dogs won’t deploy with the ship, the memories and photos from their visits, along with updates from their handlers on where they are at in their training program, will provide continued connection.

In fact, Mutts with a Mission has five puppies – three boys and two girls – that they plan to name based on their experience with the ship and its crew. Sailors aboard the ship already began pitching name ideas for the boys such as Sully, Crew, Avenger, CAVU, Freedom, Sailor, Light, Aviator and Poppy, and Pearl, Liberty and Robin for the girls.

In addition to the joy and stress relief that comes from playing with the puppies, many of the volunteers and staff from the USO and the other organizations supporting these events are also veterans, including retired nurses, psychologists and other highly-trained professionals. This adds additional weight and depth to the experience, and also allows sailors and veterans to work hand-in-hand to deliberately develop a positive culture and psychological safety aboard the ship – trust being the most important output and beating heart of any team.

Of course, the ship’s namesake President George H.W. Bush was no stranger to a “sailor’s best friend.” While in office, President and Mrs. Bush had a Springer Spaniel named Millie who had puppies, one named Spot, who eventually lived in the White House as President George W. Bush’s dog. Most recently, President Bush’s service dog – a Labrador retriever named Sully – was with him for the last six months of his life. Sully received wide attention for the way he laid by the president’s casket at the state funeral honoring Bush’s life of service to his family and the country. After the president’s death, Sully continued serving at the Walter Reed National Military Medical Center’s Facility Dog Program where he visits injured veterans, helping to provide comfort during rehabilitation center sessions and visit with families during what can be an emotional and very difficult time.

After their visits with sailors on the ship in Hampton Roads, these particular pups will continue training and living a life of service and companionship as specially trained service dogs to qualified veterans, law enforcements officers and first responders.

No matter what the future has in store for all of these dogs, one thing is for certain: these pups are proving time-after-time that they are a sailor’s best friend.

-This story was originally posted on DVIDShub.net. It has been edited for USO.org.