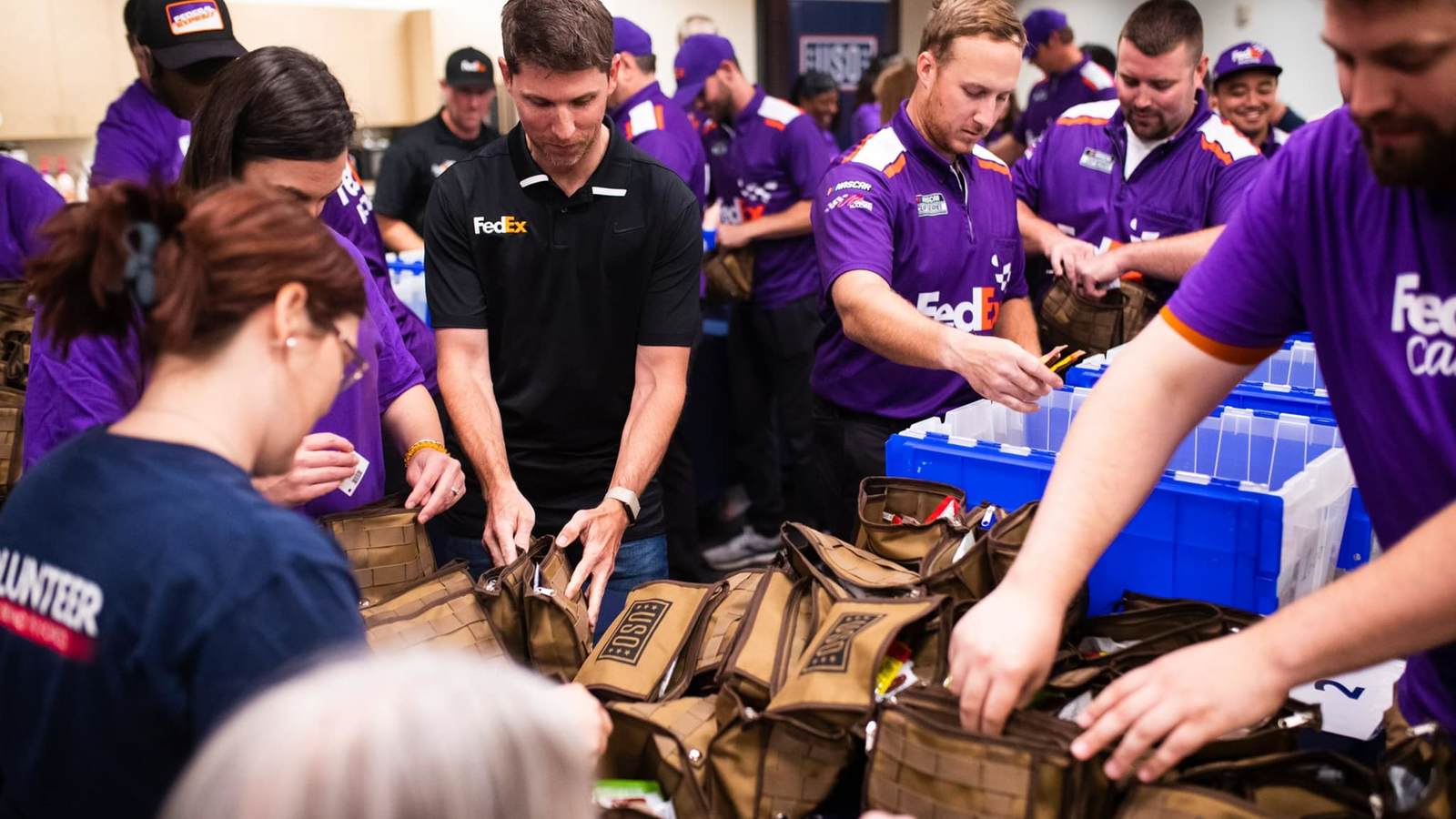 The USO recently teamed up with FedEx, Denny Hamlin and the #11 FedEx Racing team to build 2,500 USO Care Packages to be sent to service members across the globe, and those currently supporting operations in Europe.

The USO Care Package Program is designed to provide service members with a connection to home through a snack or toiletry care package designed to best suit the needs of our military men and women – just as every ounce of weight is carefully measured on their race cars by NASCAR race teams before the big race, each additional pound added to a military pack serves as an additional strain and weight for a service member to bare on their mission.

For over 20 years, FedEx has teamed up with the USO to deliver supplies and materials that help strengthen and connect service members, even in the most remote areas of the world. With the support of FedEx, the USO effectively delivers programs and packages to an increasing number of service members and their families each year no matter where they serve.

“The USO and FedEx are a winning team, said Jim Whaley, Regional President, USO Southeast Region. “From transporting furniture for overseas centers, to shipping materials for family and military spouse programs, to delivering care packages and USO2GO kits to deployed troops, FedEx helps the USO to provide the military and their families with reminders and comforts of home.” 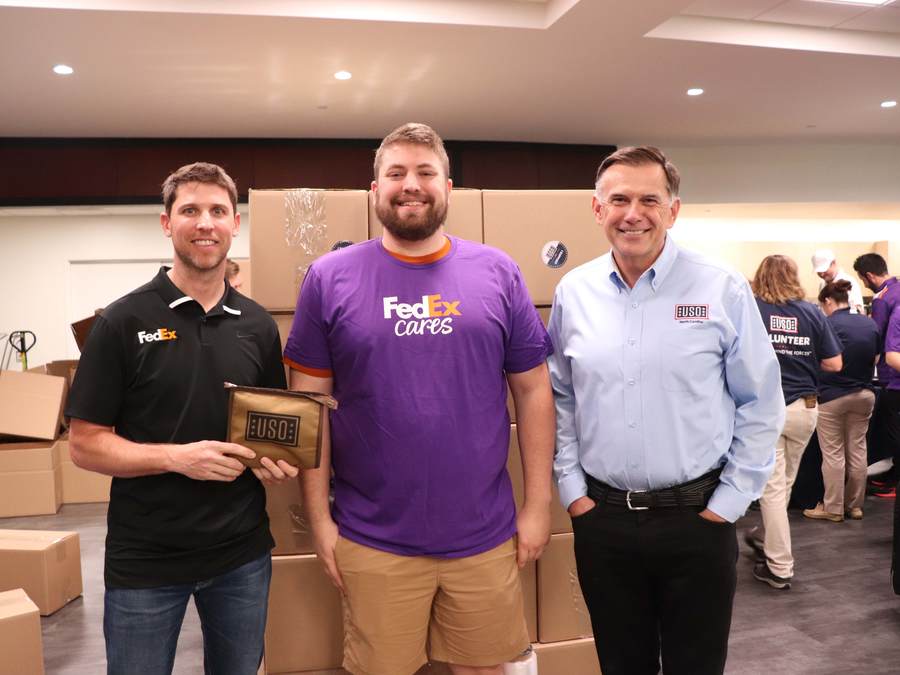 “To be hands on, and to build care packages for service members overseas and providing the resources they need is important to me and FedEx Cares, and I’m proud to support the USO,” said Hamlin. “The USO is an important part of our military in keeping them focused on their mission.”

Meeting at the Joe Gibbs Racing team headquarters in Huntersville, N.C., volunteers and staff with FedEx Cares, USO North Carolina and Hamlin’s racing team worked together to carefully pack Snack Packs in the ‘desert tan’ USO Care Packs, constructed with a durable nylon material that has a Modular Lightweight Load-carrying Equipment or M.O.L.L.E. system on the back of the pouch for attachment on most military issued gear.

The Snack Packs were assembled with a mixture of healthy treats, drink mixes and candy.

In 2021 alone, USO staff and supporters delivered over 200,000 USO Care Packages to members of the U.S. Armed Forces serving all around the world – an impressive feat considering that each individual care package was hand-stuffed. One of the ways USO Care Packages are typically assembled is through care package stuffing events. At these exciting community occasions, USO staff members, volunteers, corporate partners and, on some occasions, the general public, come together to stuff hundreds to thousands of USO Care Packages. 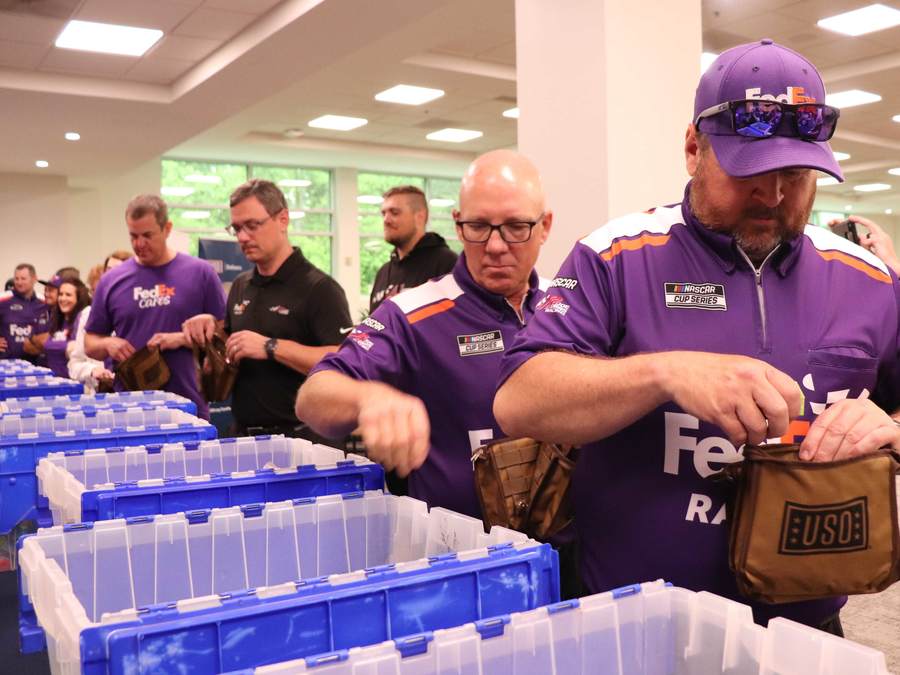 For Frank Hodel, the driver for the FedEx Racing Team Hauler and a U.S. Marine veteran, the packing event brought his USO experience full circle, from his time in the Marine Corps to now. “It’s awesome. I mean, I feel just as much excitement giving back to the USO as much as I felt when I received a USO care pack many years ago as young Marine, this is pretty cool,” said Hodel.

In addition to the support provided by the FedEx Racing team like Hamlin and Hodel, associates from the local FedEx distributions and operations centers volunteered to help and stuffed over 2,500 care packages.

“Having served in the Navy not too long ago, I know how important USO care packages are to our sailors on deployment,” said Jonathan C. McKinney, FedEx Ground Area Engagement Manager and U.S. Navy veteran. “For a lot of young sailors who don’t have much family, it is always nice to get a taste of home or a package in the mail that you weren’t expecting, especially when you are stuck in the middle of the ocean on a ship.”

Sharon Jackson, Supervisor of Operations for FedEx Freight who has multiple family members who have served, to include her son who served in the Marines and a nephew who is a soldier currently stationed at Fort Benning, this packing event had special meaning for her. 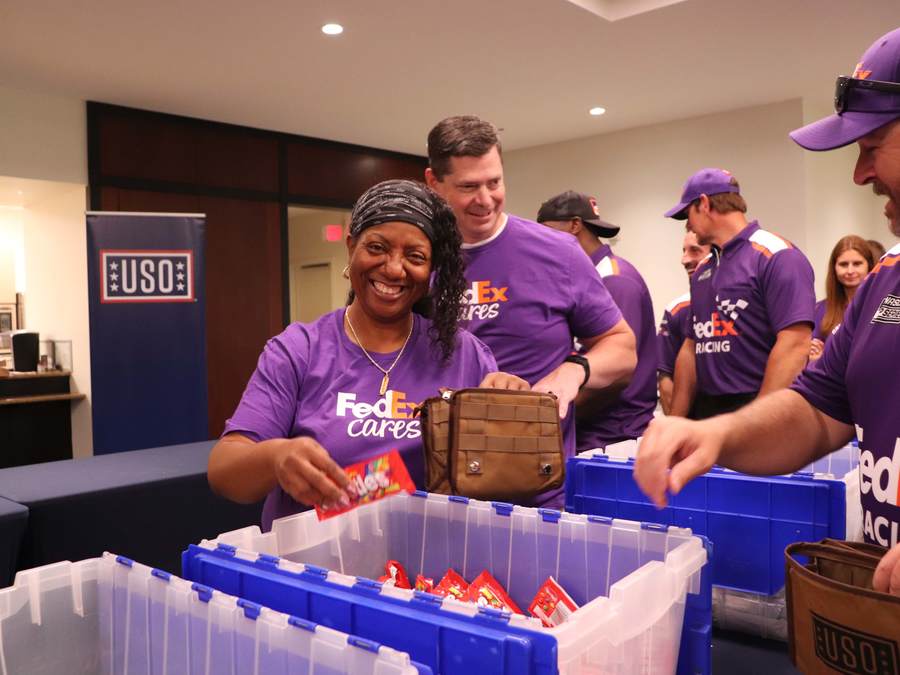 “I have known about the USO for years, but to be out here making care packages for service members and potentially of my own family members who may get deployed feels awesome, and it touches my heart to know what we are doing here today will deliver a taste of home to them,” said Jackson.

Through the FedEx Cares program, FedEx is committed to building strong local communities. This care package stuffing event is just one of the many ways FedEx supports service members and their families through the USO.

In December 2020, the USO announced its three millionth care package delivery since 2003, and FedEx helped to deliver more than 50,000 special USO Holidays care packages to locations around the world.

During the holidays, FedEx team members also sent messages of thanks and encouragement to the troops. Opportunities like this align with USO’s mission to strengthen America’s military service members by keeping them connected to family, home and country, throughout their service to the nation.

The USO Care Package program harkens back to the USO’s early years, when Americans packed boxes full of little “tastes of home” to keep deployed service members connected to the people, places and things they cherish. Those small gestures provide the comfort and care that make a difference for service members stationed far from home.