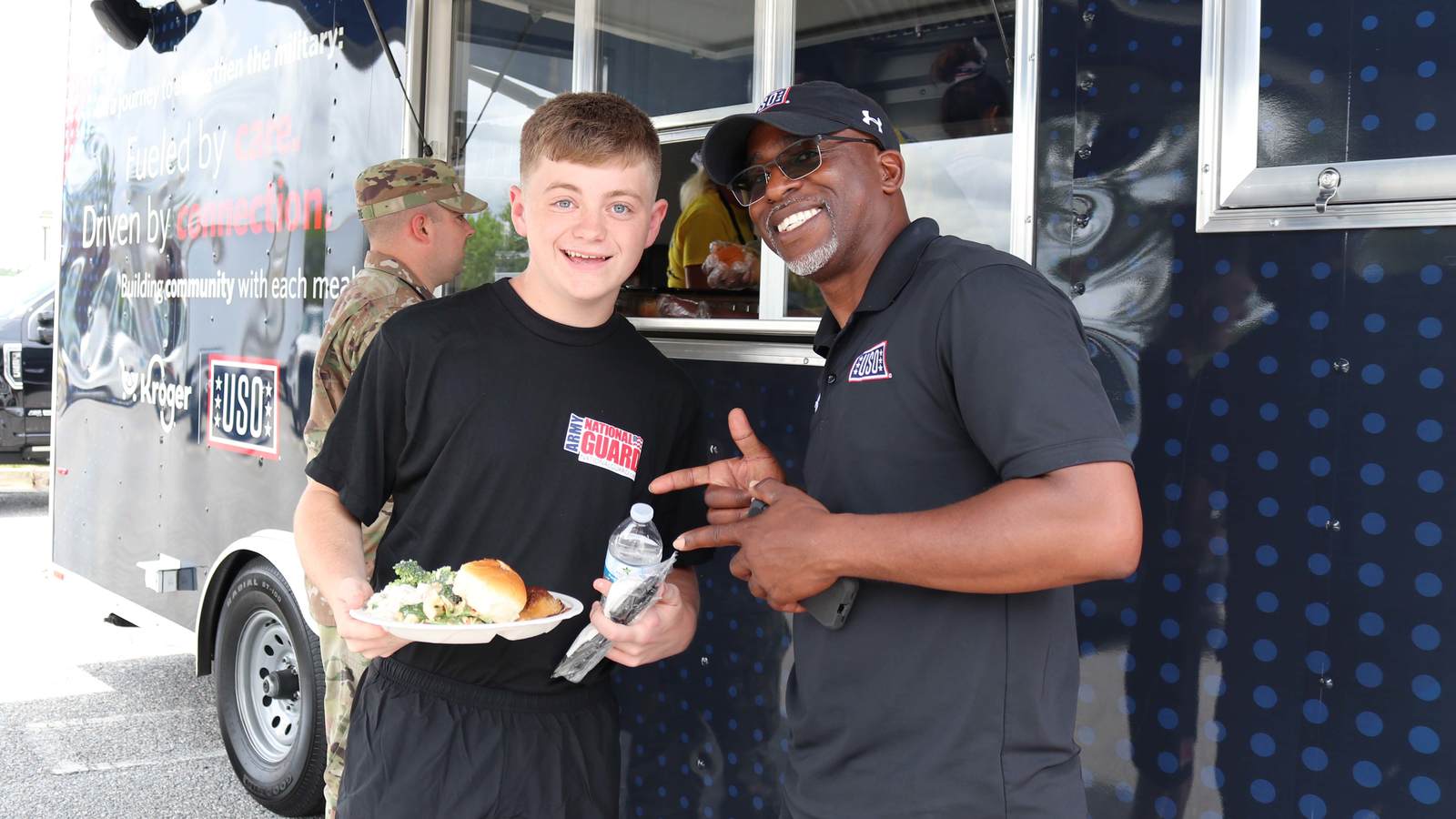 Ever since the USO’s founding in 1941, the USO has provided our military and their families with a large variety of food support. Whether it’s providing snack care packages on the front lines or a meal at one of our 270 center locations, our food programs supplement the robust food offerings provided by the U.S. military.

These meals and food programs provide our military communities the opportunity to take a break from the daily stresses of military life, connect with the local community and make new friends, all while enjoying a warm meal provided by our donors, volunteers, and staff.

Since 2010, Kroger and its customers have provided over $25 million in funding to help support the USO in providing various programs and services, including food programming, to over one million service members and their families in the Southeast, U.S., and many more across the globe.

Most recently, the USO teamed up with Kroger - America’s largest grocer - launching a mobile food program that served local military communities throughout Georgia, celebrating the partnership between the USO and Kroger with the launch of the USO’s newest Mobile Food Vehicle.

“The USO is proud to uplift the U.S. military community with the help of our partner Kroger,” said Brian Cowart, Chief Development and Marketing Officer at the USO. “This initiative offers the American people the opportunity to give back to those who have sacrificed for our country and to connect with service members through the joy of food.”

The Mobile Food Vehicles are adaptations to the current Mobile USO fleet; once completed, the fleet will have three co-branded USO-Kroger Mobile Food Trucks and trailers, which will embark on a journey to strengthen the military; fueled by care, driven by connection, while building community with each meal.

Through this partnership, the USO and Kroger Mobile Food Vehicle provided nutritious meals to service members and their families, delivering to them a taste of home, during the USO Mobile’s tour.

“The USO and Kroger have long worked together to support our military service men and women and their families,” said Denise Osterhues, Kroger’s senior director of sustainability and social Impact. “Together, we are bringing warm meals and taste of home to service members wherever they are, and the addition of the new Kroger-USO mobile food vehicles will be at the center of our shared mission to nourish our neighbors.”

The tour kicked off May 16 with a ribbon cutting and ‘Stuff the Truck,’ event at the Chamblee Tucker Kroger store in Atlanta, Ga., and ended at Fort Stewart on May 21, with a warm meal and other tasty treats for family members of 3rd Infantry Division soldiers who are currently deployed in Europe.

Along the way, the USO-Kroger Mobile Food Vehicle made a stop at Dobbins Reserve Air Force Base, delivering wholesome food and meals to the local military community stationed there, then pulled into the Grovetown Kroger store to collect more donations during another ‘Stuff the Truck,’ event.

Donations provided at the Atlanta and Grovetown Kroger store will have a huge impact on the military community, especially those who are forward deployed and currently serving as a member of the U.S. Armed Forces.

Following the Grovetown Kroger store ‘Stuff the Truck,” event, the Mobile Food Vehicle visited Fort Gordon paying a visit to the soldiers and their families, delivering some of the fresh healthy food and other items collected at Grovetown.

“It’s a warming feeling knowing that people actually do care, that all the stuff we have to go through and deal with that they have the time, money, and efforts to donate these items,” said U.S Army Sergeant Chris Cooper, who is currently serving at Fort Gordon.

After visiting Fort Gordon, the USO-Kroger Mobile Food Vehicle made its final pit-stop on its Georgia tour, stopping in at Fort Stewart for a family fun event for the military families stationed there, and for the families of the 3rd Infantry Division soldiers who are currently deployed in Europe.

This event demonstrated Kroger’s, the USO’s and Fort Stewart’s commitment and support for the well-being and resiliency of the soldiers and their families who call Fort Stewart home. During the event over 1,000 military families enjoyed face painting, cotton candy, snow cone machines, a warm meal, and other tasty treats thanks to the generous support of Kroger’s staff, volunteers, and the USO-Kroger Mobile Food Vehicle.

“The food was delicious, and the kids just loved coming in and enjoying everything the USO and Kroger volunteers shared with us today,” said Lindsey Fowler a military spouse and mother of four who attended the event while her husband is deployed. “Being able to come in, enjoy a warm meal and select some goodies that were being handed out really made the kids feel special.”

Georgia Army National Guard soldiers who recently completed basic training who were also in attendance were overwhelmed by the event, and grateful to have an opportunity to get a break from the outside heat during their follow-on training at Fort Stewart.

“It is so nice to take a break, and enjoy some barbeque. It feels like home in here,” said Private Michael Doucette.

From handing out snack care packages to activated National Guard members during hurricanes, to providing meals to local military families impacted by a natural disaster, the USO has a long history of providing meals and snacks to military communities during emergencies.

“Supporting our service members and their families is at the heart and soul of what the USO is all about,” said Courtney Due,” Senior Center Operations and Programs Manager, USO Fort Stewart. “We are honored to partner with Kroger to strengthen our service members and their families through a shared meal and community building during events like this, and we look forward to hosting many more with Kroger.”