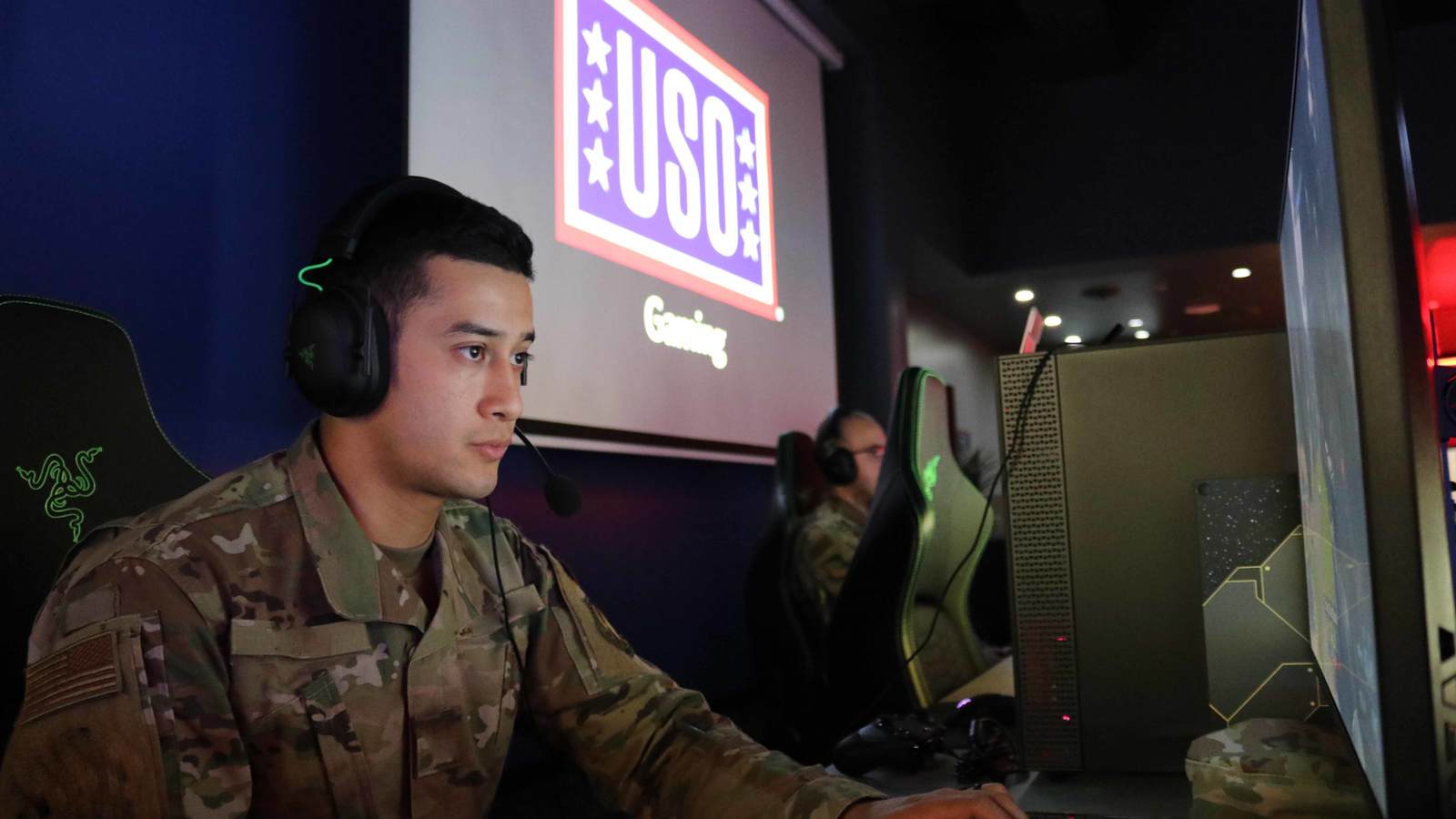 By constructing gaming centers across the U.S., as well as creating dedicated spaces at USO centers and sending gaming units overseas to remote locations, the USO serves as a place for service members and their families to unwind and connect – as well as participate in USO Gaming events.

Video games are so much more than a screen, a game console and the act of putting on a headset for a few hours of fun. For many service members, the escapism of video games can allow them to forget – just for a moment – the daily stress of the military lifestyle.

Gaming is an important tool for the USO to strengthen our military by helping service members stay connected to family, home and country, and each other and the USO will continue to grow its USO Gaming offerings throughout the globe.

“The incredible ability of gaming to build community and strengthen bonds goes straight to the heart of the USO’s mission to keep our service members connected to family, home and country throughout their time in uniform,” said Dana Cervantes, Executive Director, USO Northwest Florida. 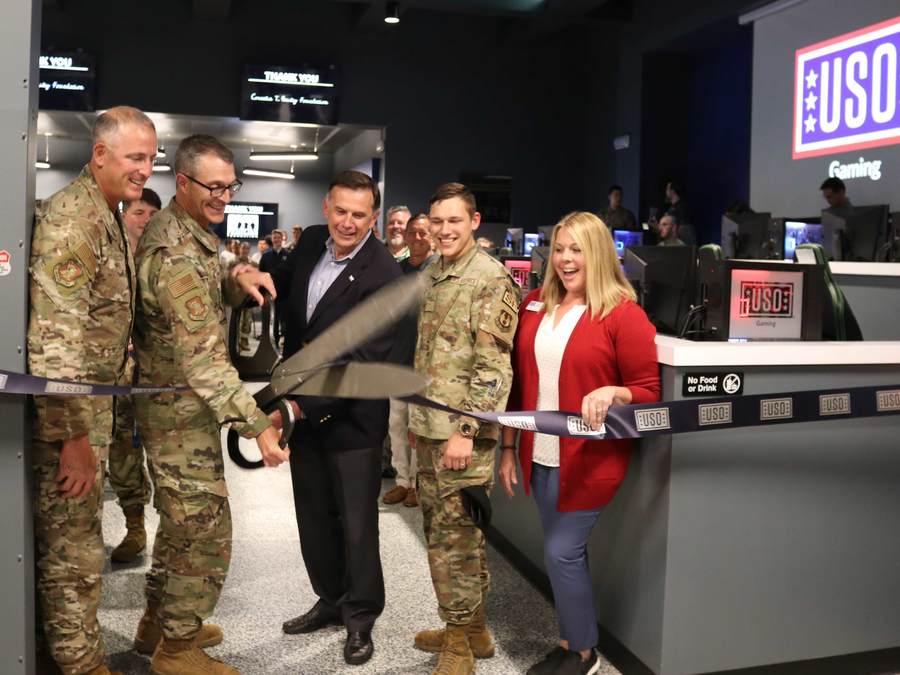 “This new center is a game changer,” said Cain. “Our junior airmen living in the dorms across the street now have a world-class facility they can come to and unwind, relax and build comradery.”

For service members who attended the grand opening, the new gaming center far exceeded their expectations.

“It was astounding. There are very few moments that induce a reaction like I had first walking into the gaming center,” said Air Force Staff Sgt. Tyrone McKenzie, who was born and raised in Kissimmee Fla. “To sit down and see each station with top-of-the-line equipment from start to finish was mind-blowing. As a gamer, I’ve invested my own funds to create a comfortable gaming experience at home, but this was another level.” 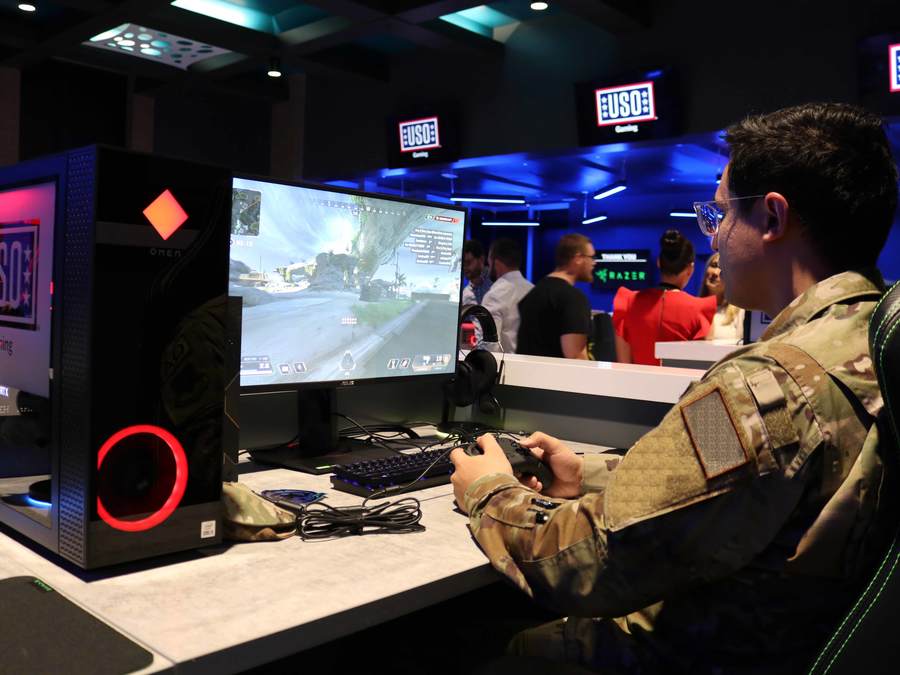 The new USO Gaming center which is open from 11am to 7pm, Monday thru Friday, boasts 24 gaming stations, where service members and their families can enjoy playing their favorite video game on either an Xbox Series X – Halo Infinite Limited Edition console graciously donated by Xbox, or on a HP Omen 30L Desktop GT13-0380t console.

Service members and their families will also sit comfortably in any one of the Razer™ Iskur ergonomic gaming chairs designed for posture-perfect, hardcore gaming. Each station also includes computer mice, mats, keyboards, headsets, headset stands, and other gaming equipment and peripherals all donated by Razer™.

The gaming center is also adorned with colored led lights that are adjustable, creating a calming and safe environment for service members and their families to enjoy together.

“I first walked in and I was like - wow,” said Airman Kalen Williams. “I’m excited that we finally get a USO gaming center here at Eglin, a place where I can go to and relax.”

The gaming center will also serve as a community center where service members and their families can go for special programs, and where troops may spend their off-duty with friends and family locally, or connect online while gaming together.

The USO Eglin AFB Gaming Center is the largest USO Gaming center in the world. As is the case with all of the USO’s work on behalf of our nation’s military, projects such as these are largely made possible thanks to the support of our donors. In this case, primary funding for the construction of the center was made possible through a generous gift from the Cornelia T. Bailey Foundation. Operational costs for the first year were also made possible in part by their gift, and that of The Armed Forces Family Foundation, which has been a significant partner and source of support for numerous construction and renovation projects at USO centers in the southeast.