By Barry Morris and Sean Erdrich 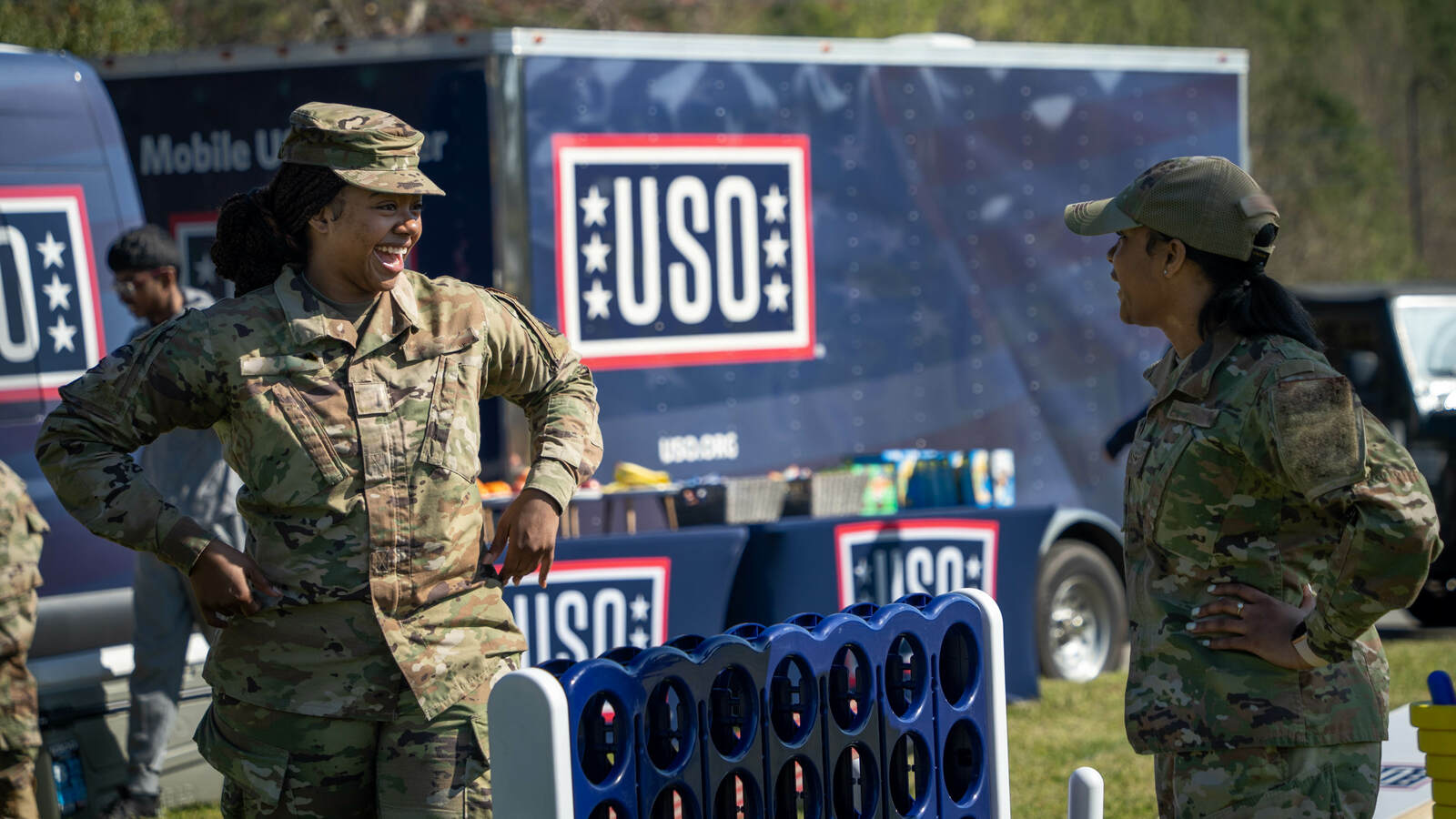 Between their patriotic paint schemes and their iconic USO flair, Mobile USO units are easy to spot on the road and almost guaranteed to bring a smile to your face.

Designed to serve as “USO centers on wheels,” Mobile USO units provide USO services to military locations without a brick-and-mortar USO center, and other underserved areas where the USO can significantly impact and strengthen service members and their families. These areas include disaster zones, remote training areas or military bases.

If you’ve ever spotted a Mobile USO unit on the road, chances are it was headed into the field to support service members working at an isolated location, miles away from their friends and loved ones back home.

Most recently the USO Southeast Region Mobile Unit was in Mississippi supporting the 14th Security Forces Squadron and their military volunteers as they provided security during the 2022 Wings Over Columbus Airshow, March 25 – 28.

Beginning the day at 6:00 a.m., the USO Mobile unit picked up freshly made donuts and breakfast sandwiches for the troops, and by 7:00 a.m. more than 150 airmen were filing through the line to grab a quick bite as they prepared for the long day ahead. 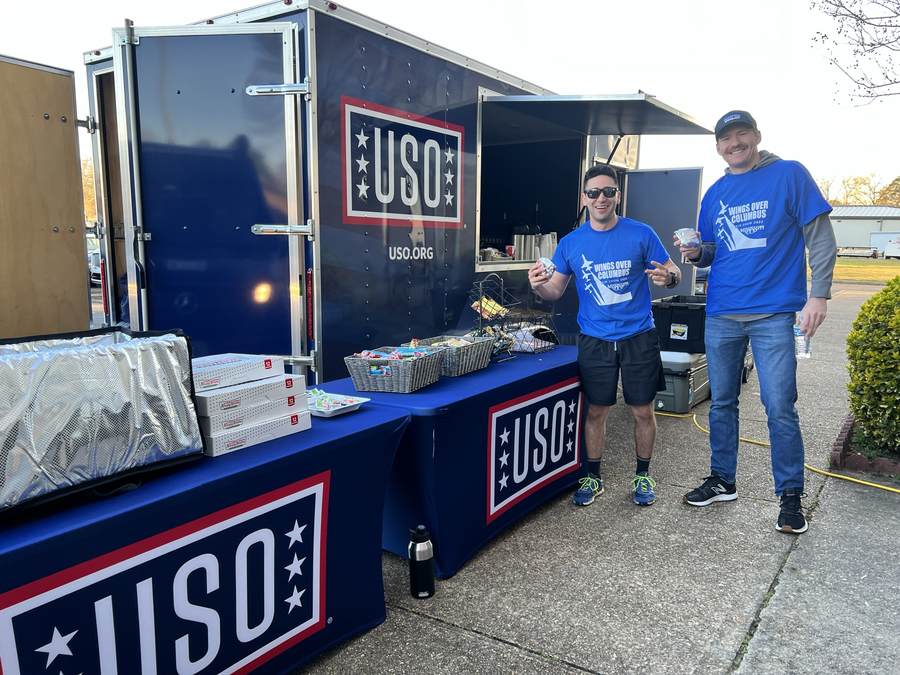 “The airmen were groggy and tired, and you could clearly see their mood lift when I handed them a freshly brewed cup of coffee and a hot breakfast sandwich,” said Sean Erdrich, regional mobile operations and programs specialist, USO Southeast Region. “For me, the sense of pride I have in what our service members are doing for our country, and what the USO is doing to give back to them, makes the early morning wake up calls and long hours’ worth it.”

Later in the afternoon, Felice Gillum the executive director, and Nicole Lewis the center operations and programs manager for USO Gulf Coast coordinated with Erdrich to provide lunch for the airmen working the airshow. Leveraging the USO Mobile units’ unique ability to transport and deliver food and refreshments to the airmen providing security, the USO was able to engage a higher percentage service members working the event, serving well over 800 airmen.

“USO Gulf Coast was honored to provide breakfast, dinner, beverages and snacks to over 800 airman that worked the Columbus Air Force Base Air Show,” said Gillum. This event has a long and rich history in our state and it’s always a pleasure to assist our bases with taking care of our service members so they can focus on taking care of the community during these type of events.”

“When the USO Mobile unit pulled up I just watched everyone’s faces light up, it was like ‘The party has arrived’,” said USO Georgia center operations and program manager Jessica Shelton. “Between the grand entrance of the mobile, our outdoor games, cold beverages, snacks, and the music playing, we were able to add so much to the overall atmosphere of an amazing event.” 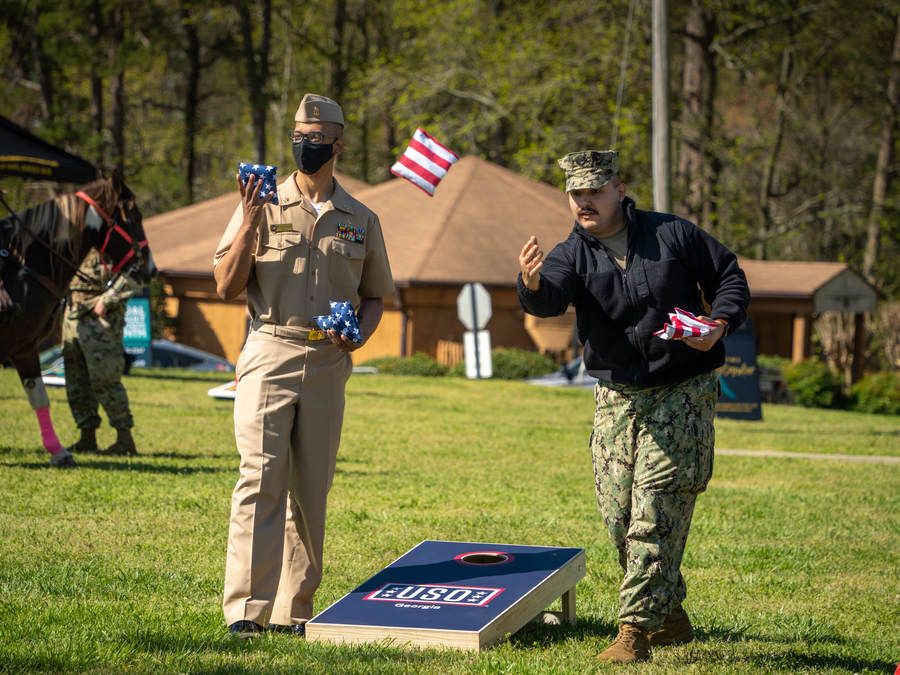 Unit leadership overseeing the SAPR event were also impressed with the USO’s support, with one air force Senior Master Sergeant sharing that he “can’t wait to show [his airmen] what the USO is all about.”

Over the last several years, the USO has expanded its mobile fleet to include three large R.V. units and five smaller sprinter vans, all custom-designed to provide entertainment, connectivity and a touch of home to military members and their families – no matter where their journey takes them.