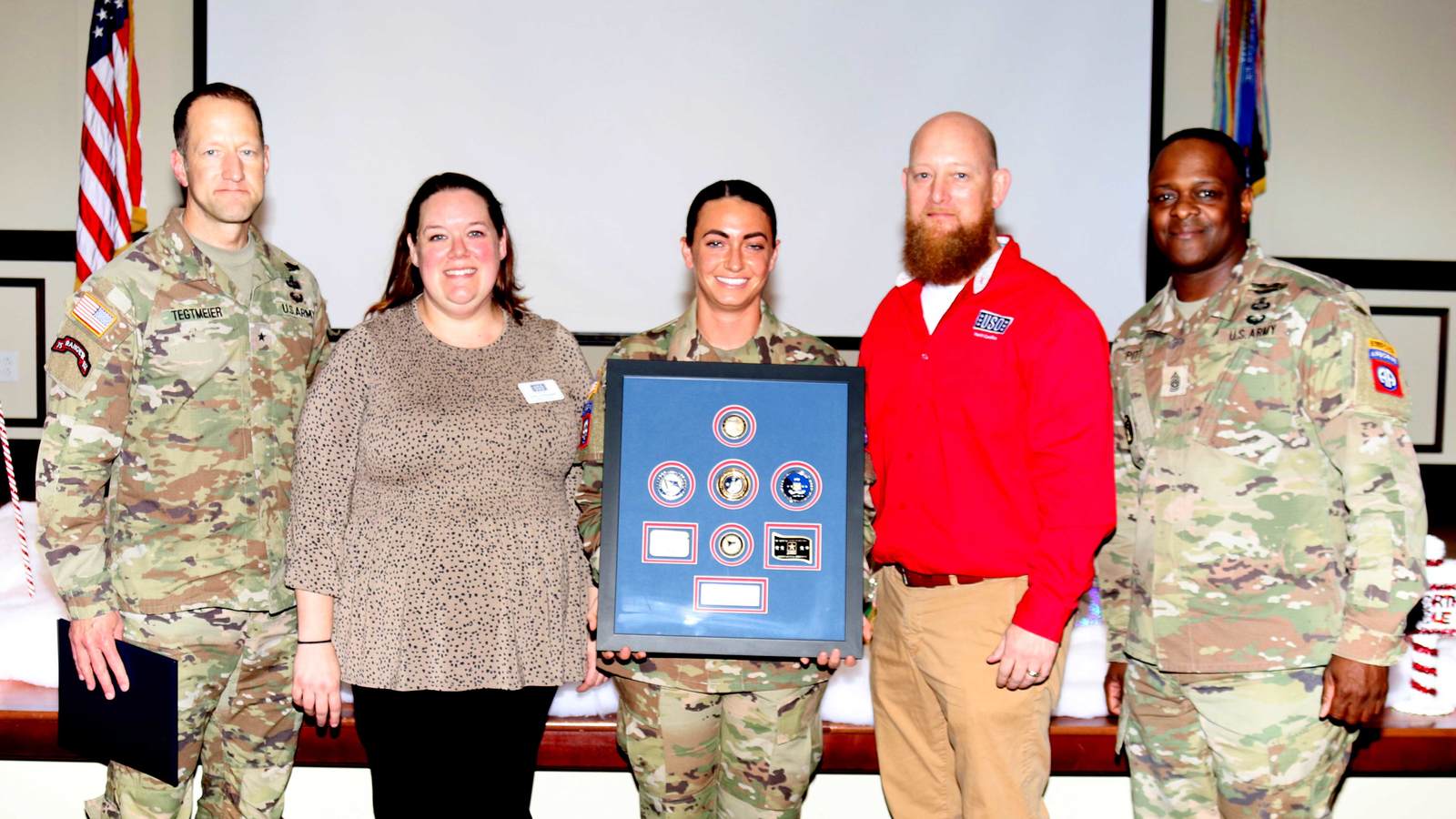 Many people know what the words loyalty, duty, respect, selfless service, honor, integrity, and personal courage mean. But how often do you see someone actually live up to them.

This is why each year, the United Service Organizations (USO) awards exceptional service members from each branch of the armed forces with the USO Service Member of the Year Award, honoring the outstanding contributions of America’s junior enlisted service members who represent the standards and values of their respective branches of service, as demonstrated through a specific act or multiple acts of heroism or valor.

For 23-year-old chaplain assistant, Sgt. Breanna Jessop, who joined the Army in 2016, she clearly demonstrated the U.S. Army’s core values and her personal courage when she deployed with the 82nd Airborne Division as part of the Immediate Response Force (IRF) tasked with helping evacuate U.S. embassy personnel and others from Kabul, Afghanistan.

“Sgt. Jessop serves as a tremendous example for all paratroops and quite frankly all Americans,” said Brig. Gen. Brandon Tegtmeier, deputy commander of the 82nd Airborne Division, XVIII Airborne Corps. "She lives our Army core values every day and is committed to the well being of others.”

As a result of her untiring humanitarian efforts in Kabul, Jessop was recognized as the USO Soldier of the Year during a ceremony at Fort Bragg, North Carolina, Dec. 17.

Kelli Willoughby, executive director for USO North Carolina presented Jessop with the USO Soldier of the Year award on behalf of the USO.

“The USO is proud to honor Sgt. Jessop for her distinguished service and extraordinary efforts in service to our nation,” said Willoughby. “Sgt. Jessop certainly earned this year’s place as the 2021 USO Soldier of the Year.”

When Jessop learned that she was selected as the USO Soldier of the Year, she was in disbelief.

“When I found out that I had been named the USO soldier of the Year, I was shocked,” said Jessop. “I am honored to receive this award, and represent the USO.”

As a chaplain’s assistant, Jessop’s primary mission is to build Army spiritual readiness to deploy, fight, and win our Nation’s wars, by providing reliable and relevant world-class religious support, as a unique element of the Army that is fully engaged across the full spectrum of conflict.

When the 82nd Airborne Division was called to support noncombatant evacuation operations at Hamid Karzai International Airport in Kabul, in the fall of 2021, Jessop assumed the role of noncommissioned officer in charge of the Karzai Airport Chapel.

Always putting the well-being of soldiers first, Jessop used her ingenuity to ensure 4,000 U.S. military personnel and coalition forces had access to basic hygiene items when resources were limited or nonexistent.

At the height of the mission, Jessop also provided phenomenal leadership to oversee the operations of an orphanage, which had been recently formed due to the increased number of unaccompanied minors following the events in Afghanistan. 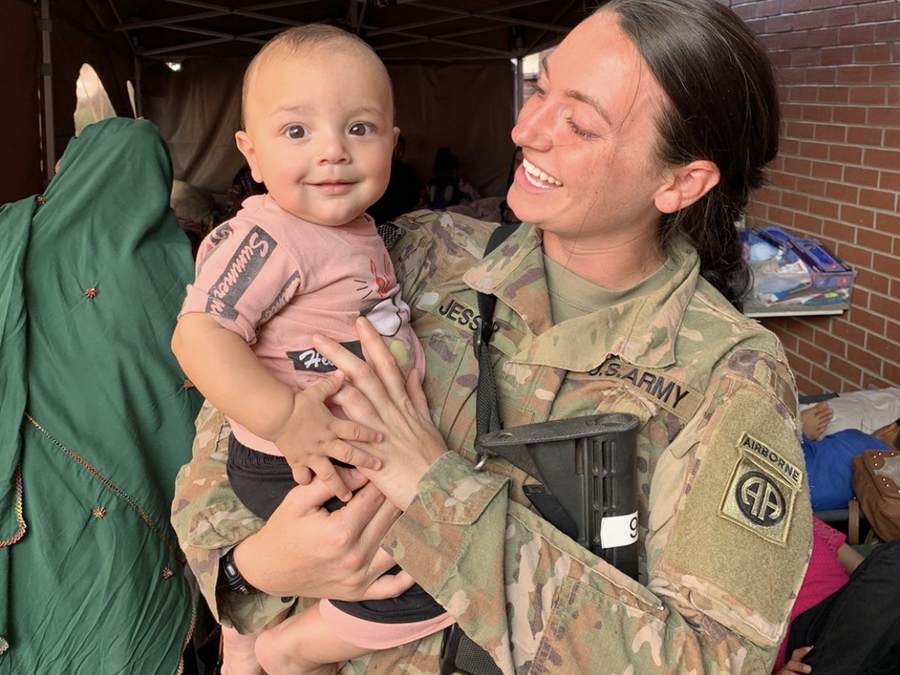 She led the mission to assist in caring for all children in the orphanage, who ranged from ages seven days old to 17 years old. She ensured the protection of over 400 displaced children who were safeguarded throughout noncombatant evacuation operations and enemy attacks.

Jessop helped to coordinate the distribution of bags of baby supplies, everything an infant would need during a food drive at Hamid Karzai International Airport. The drive was hosted by the 82nd Airborne. Div. chaplain’s office who procured baby formula, diapers, juice, baby food and crackers for distribution to Afghan families who were evacuating the country. 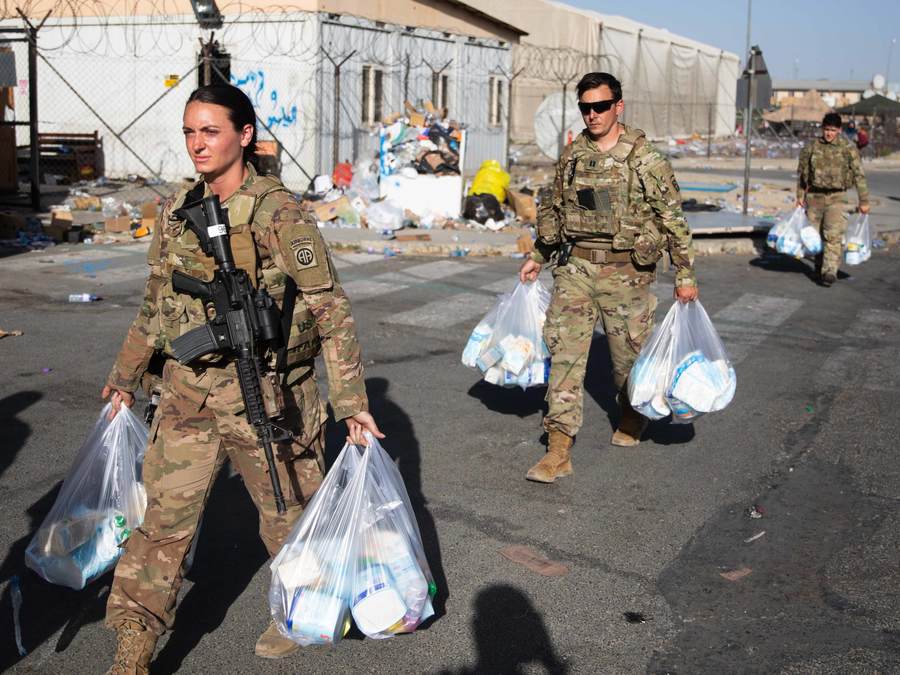 She not only protected the well-being of these children but also protected their dignity as human beings. Jessop displayed her devotion and selfless leadership under duress, carrying out military operations as well as humanitarian efforts. Her work left an indelible mark on the evacuation mission of American citizens and designated Afghans.

Sgt. Breanna Jessop serves with the U.S. Army’s 82nd Airborne Division and is from Myton, Utah.