Just as the U.S. Marine Corps stands ready to deploy as an expeditionary force-in-readiness at a moment’s notice, the USO is always at the ready to support them.

The ‘Barracks Bash’ was hosted by the leadership and senior staff non-commissioned officers of 2dTB, CLR-2, to boost the morale of their Marines, while promoting team building, unit cohesion and esprit de corps in a safe and enjoyable environment. Included the list activities for this event were basketball, baseball, horseshoes, cornhole, music and of course USO Gaming.

“We reached out to the USO to support our ‘Barracks Bash Day,’ and due to the limitations of COVID we had to get creative on ways to enhance team building to get our Marines out of the motor pool and office spaces allowing them to decompress,” said Lt.Col. Randall D. White, Commanding Officer, 2d Transportation Battalion. “The USO really facilitated a top-flight event through their USO Gaming program.”

“The ‘Barracks Bash,’ was a great event for the Marines to come together in a relaxed environment and enjoy their afternoon. It ended up being an extremely successful event that not only boosted morale, but also broke up the everyday monotony that these Marines tend to see,“ said Hailey Day, Center Operations and Program Coordinator, USO NC-Jacksonville. “The Marines had a great time, and we are looking forward to more events like this in the future.” 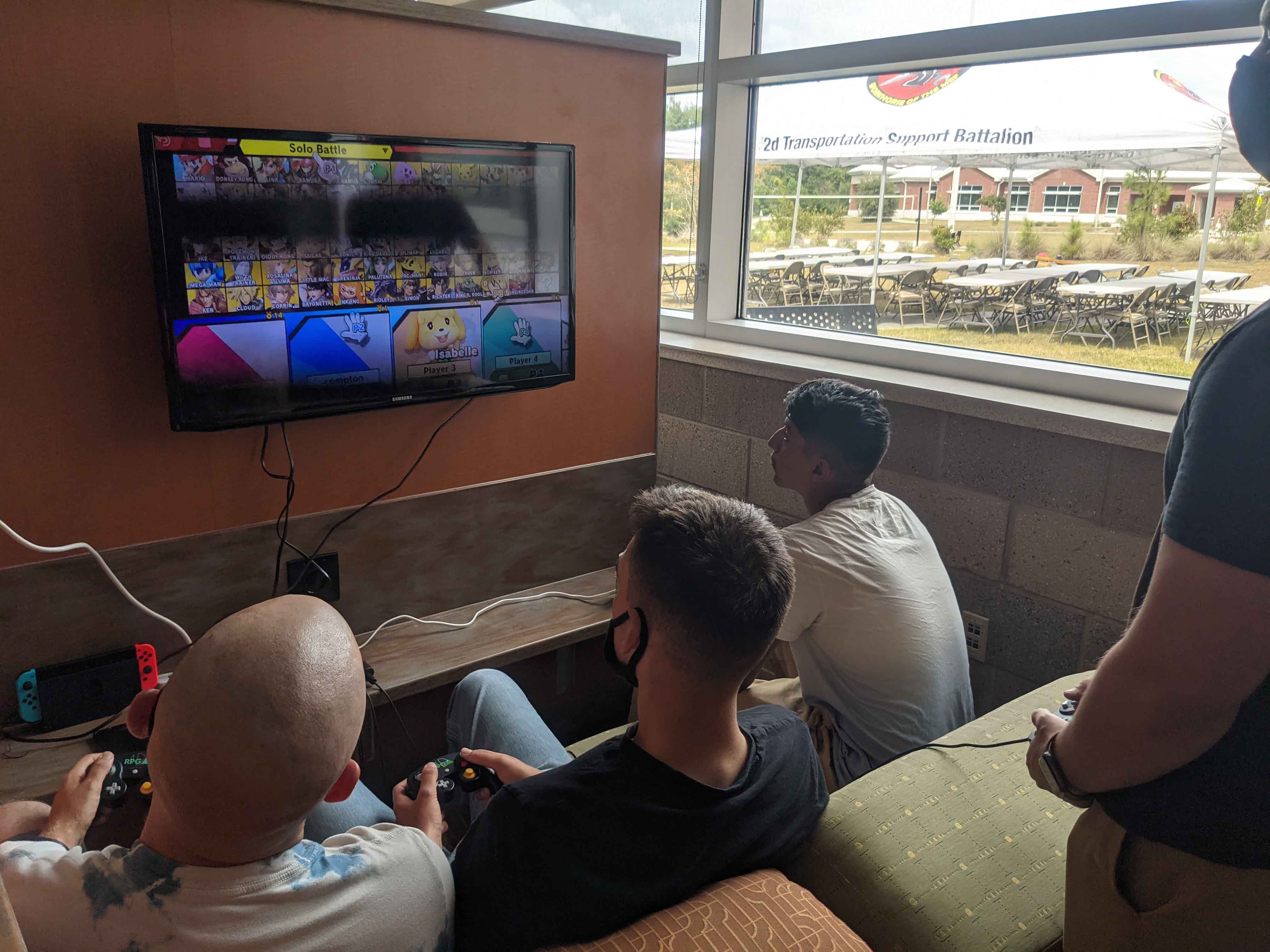 Upon receiving the support request from the Marines, USO NC immediately reached out to the USO Southeast Regional Gaming Events Manager, Ross Ledford who wasted no time in making preparations. With the support of Heather Rossi, a USO NC Programs Manager, the two loaded 16 X Box One consoles and 4 Nintendo Switches into a USO van and made their way to Camp Lejeune.

"Over the past 18 months, The USO has developed the capability to deploy expeditionary gaming centers within the U.S. Southeast and Capital regions, within a 72-hour window depending on the mission support requested,” said Ledford. "I truly enjoy supporting our service members by providing the most up to date and relevant gaming experiences, and I can surely tell these Marines were having a blast.”

This past January, ahead of the 59th presidential inauguration on Jan. 20, the USO Southeast Region deployed an Expeditionary Gaming Center to Washington, D.C.. This gaming center provided recreational support to National Guard members as well as an outlet for the soldiers and airmen to get away from their structured routine and simply relax.

“I had a lot of fun playing Halo with my buddies,” said Lance Cpl. McNeal, a Marine assigned to 2dTB, CLB-2. “I really appreciate the USO team coming out here and setting up all these consoles to help us decompress from the stresses of work. Although I didn’t win, I still had a lot of fun.”

Understanding the positive impact that gaming has on service members, especially those who are deployed, the USO has created its USO Gaming program to help reduce loneliness and relieve stress for service members during training or long-term deployments away from their families.

To ensure service members always have a way to connect and a community to support them, the USO is committed to fostering strong online and in-person gaming communities.

Since 2020, the USO has developed gaming communities across Twitch, Discord, YouTube, and Facebook, as well as building out state-of-the-art gaming and esports centers within our USO centers throughout the Southeast Region, to include USO Expeditionary Gaming Centers like the one created at Camp Lejeune.