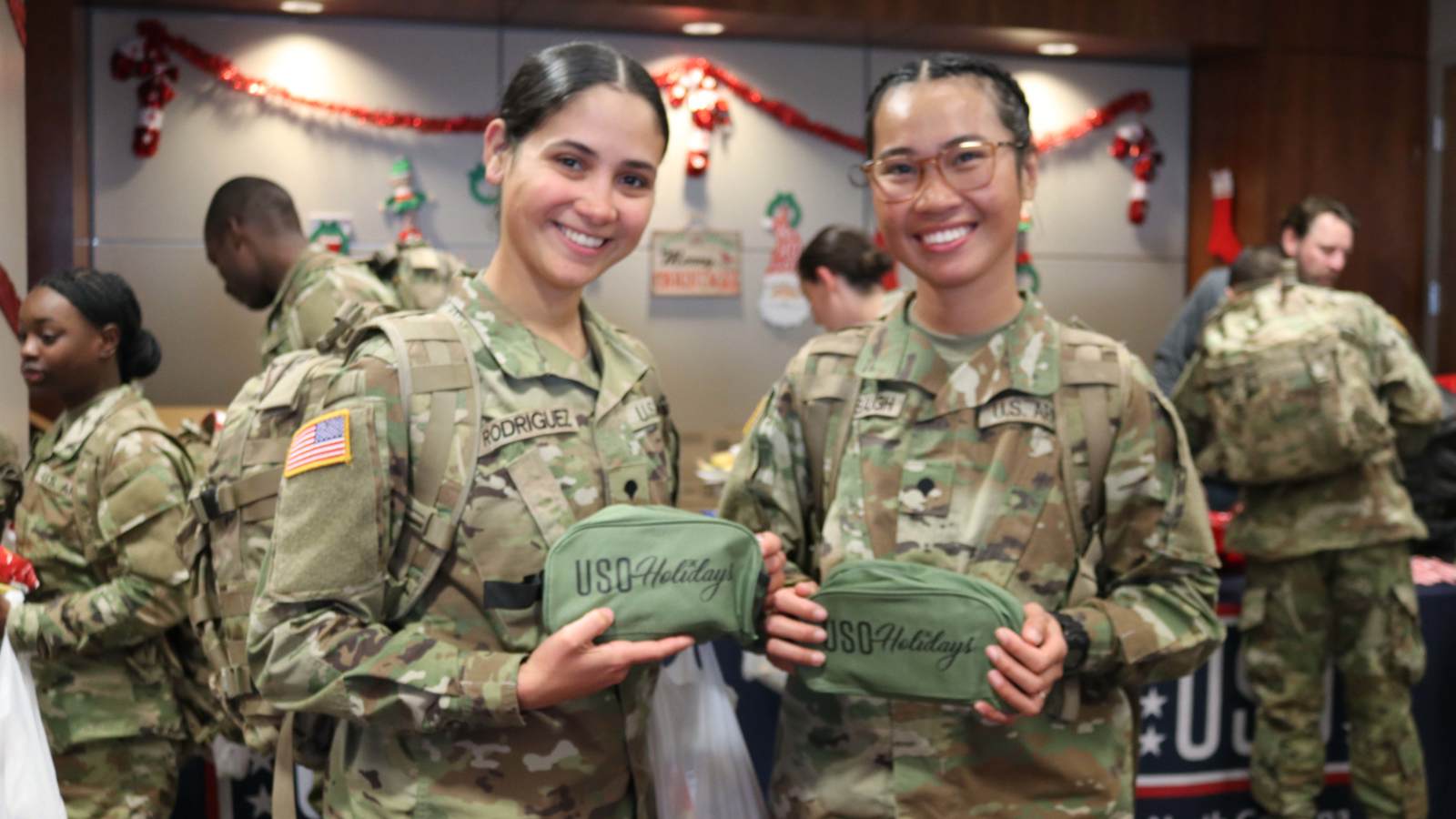 Every year, thousands of America’s sons and daughters cycle through one of the U.S. Army’s training centers for Basic Combat Training – their first steps toward transitioning from a civilian into a U.S. Army Soldier.

More than 35,000 of these soldiers from 20 installations across the U.S. took part in this year’s Holiday Block Leave period, traveling by planes, busses, and automobiles – and through some of the busiest airports in the U.S. – to be with their families during the holidays.

In the Southeast U.S. alone, more than 10,000 soldiers departed basic training at Fort Jackson, S.C., as part of Holiday Block Leave – the time-honored holiday tradition that authorizes soldiers in basic training during the month of December to travel home to reconnect with loved ones over the holidays.

For more than a decade, USO staff and volunteers have worked with Fort Jackson leadership to provide support to all soldiers and trainees traveling home for the holidays.

“We are proud to be by the side of our Fort Jackson soldiers, trainees and cadre as they travel home for the holidays. From locations on Fort Jackson and our USO center at the Columbia Metropolitan Airport, our team of donors and volunteers are sharing their time around the clock to provide a snack and friendly smile to each and every one of them,” said USO South Carolina Executive Director Joanie Thresher.

A Soldier’s First Stop on the Trip Home – the USO 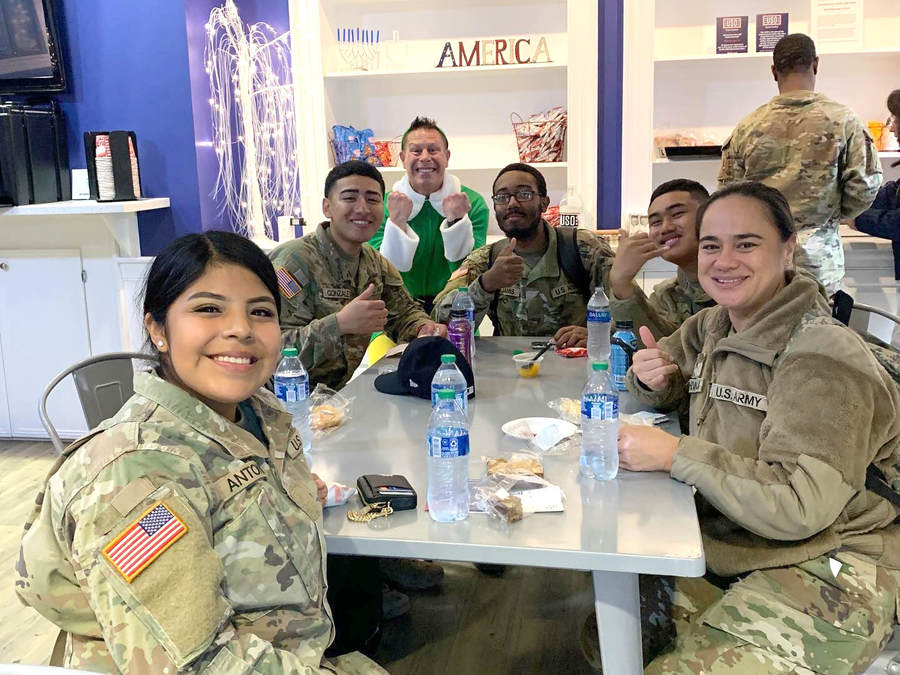 Soldiers began their journey on Dec. 16 in a staggered manner departing from Fort Jackson, the largest and most active Army Initial Entry Training Center in the U.S., located just outside of Columbia, S.C. The soldiers will make the reverse commute and return to training starting the second week of January.

To support these young service members traveling home, USO staff and volunteers spend up to 15 hours a day the entire week these young soldiers are transitioning home, ensuring they experience a safe and pleasant voyage.

“What the USO does for our service members is absolutely priceless,” said Command Sgt. Maj. Scott Beeson, the U.S. Army Center for Initial Military Training Command Sergeant Major. “The USO provides our young soldiers a taste of home before they get home, and it’s absolutely priceless and crucial for them to feel wanted during their transition to get back home.”

Soldiers from Fort Jackson typically travel through Columbia Metropolitan Airport or are bussed to Charlotte Douglas International Airport. At both locations, while soldiers wait for their flights, USO airport center staff and volunteers hand out water, snacks, and USO travel packs. These items, along with support and a warm welcome from USO volunteers, ensured traveling service members had all the comfort items they needed until they finally made it home to spend time with their families. 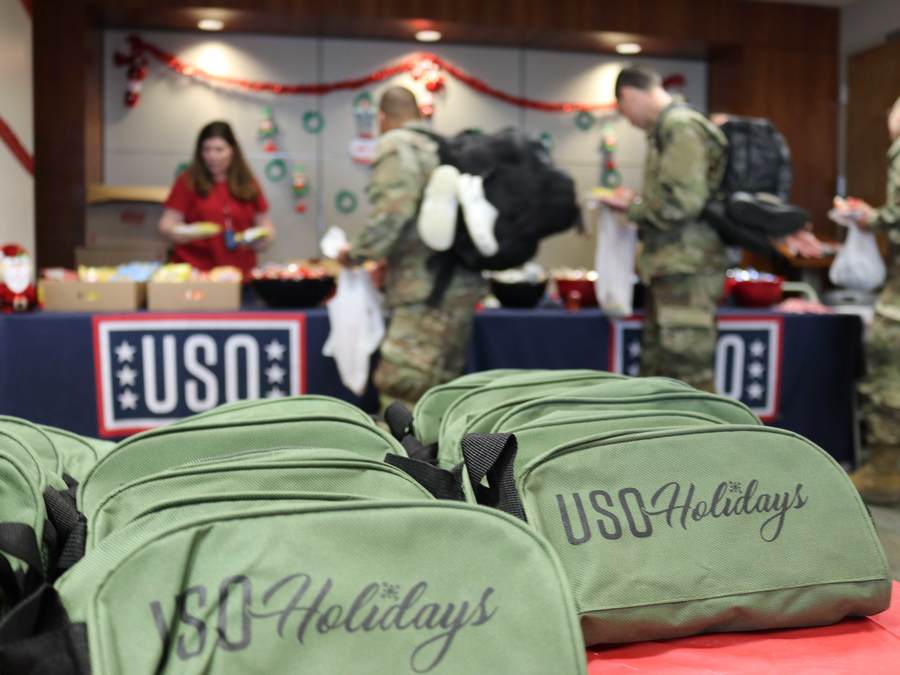 "It’s an honor to support these trainees each year as they travel home for the holidays and provide them a little taste of home along their journey,” said Julie Milani, USO North Carolina Charlotte Airport Center Manager. “We are grateful for all our partners who support us as we deliver some holiday goodness to these soldiers who are excited to head home for a much-needed break from basic training.” 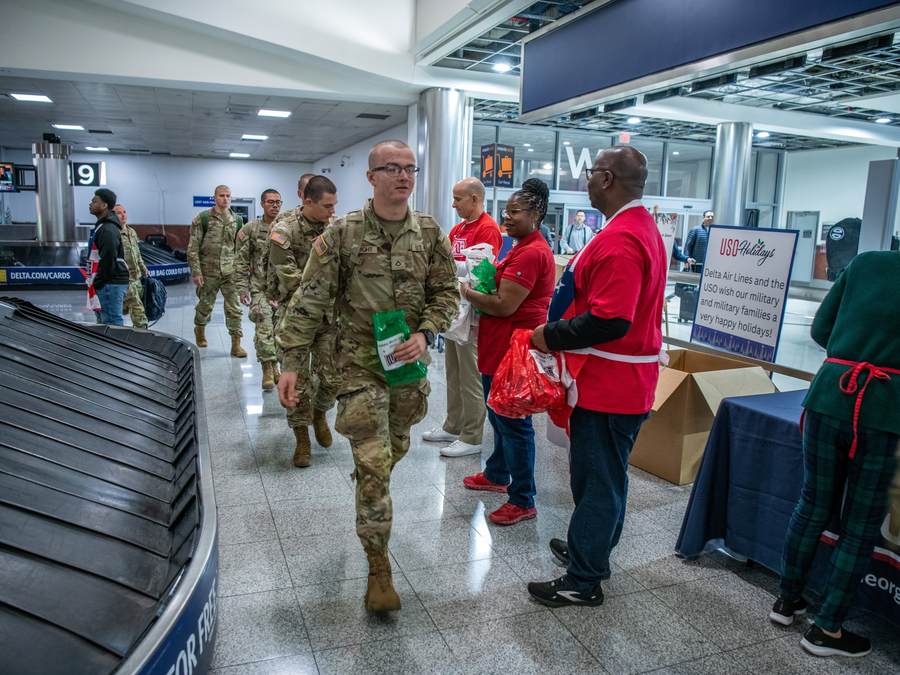 Roughly 3,000 soldiers from Fort Benning and Fort Gordon made their connecting flights through Hartsfield-Jackson Atlanta International Airport, where they were greeted by USO Georgia staff and volunteers, receiving a continuum of USO support throughout their journey home.

“The USO has undeniably made us feel at home,” said Pfc Kaitlyn Culley. “It’s such a welcome break, after being away from family for the past eight weeks.”

In Northwest Florida, Traveling Service Members Can Lean on the USO, Too

For service members traveling though the Pensacola International Airport over the holidays, the USO – which will remain open for 24-hours now through Dec. 24 – is there to support them, too.

All said and done, USO airport centers throughout the Southeast U.S. will serve more than 20,000 service members headed home for the first time in months. These service members are grateful for the opportunity to relax and unwind before flying home just in time for the holidays.

"It has been so nice to have the USO here to provide us refreshments as we finally head home to be with our families,” said Culley.